The Koenigsegg One:1 is a Sexual Tyrannosaurus

With a one horsepower to one kilogram ratio, Koenigsegg has perfected the formula for the hypercar.

The Koenigsegg One:1 is the world’s first Megacar. 1,340 horsepower will earn you that kind of distinction.

Being a performance car enthusiast and having never heard of Koenigsegg is tantamount to being a fan of the blues and having never once heard a Muddy Waters record. Of course, this is slightly more forgivable for those who limit their scope to those vehicles available in the United States, as Koenigsegg hasn’t had an official presence in the United States for some time—well, at least until Tuesday’s announcement that Manhattan Motorcars will become the automaker’s official dealer in the American Northeast. In any case, if you don’t know about Koenigsegg, you need to get familiar, and there’s no better place to start than with the Koenigsegg One:1.

For reference, the obscenely fast Hennessey Venom GT, which just set an unofficial world record for speed, has a top speed of 270.49 miles per hour, and Koenigsegg projects that the One:1 would basically hand the Venom its own ass on a platter.

“We’d like to do a top speed run but it’s not a priority. I think a track time is much more important. I mean, the Nurburgring is the only lap time that really counts,” Koenigsegg spokesman Andreas Petre told Top Gear. “I mean, if we also had access to the NASA landing strip in the US, we’d probably go at least as fast as that Venom GT. Obviously his [John Hennessey’s] top speed run is great for him, and I mean no disrespect, but we think the GT is a different sort of concept to the Agera One:1.”

One thing the Venom GT and the Koenigsegg One:1 have in common (as if you couldn’t already guess from the latter’s name) is a 1:1 ratio of horsepower-to-kilogram. The One:1 is called the world’s first “Megacar” because of its 1,000-kilowatt power rating—this means it generates 1,340 horsepower, or one horse for every one of its 1,340 kilograms (2,954 pounds). 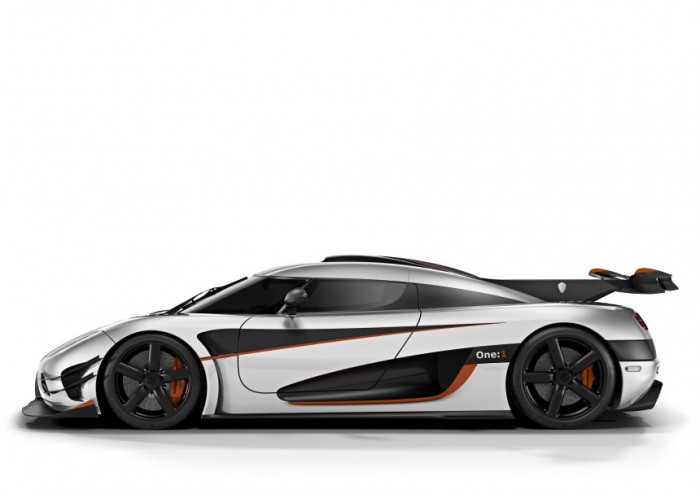 This thing hunts you in your nightmares. It always catches you, too.

What else is unique about the Koenigsegg One:1—as though you need anything past its record-shattering power? It’s got track-optimized aero winglets, extended venturi tunnels and side splitters, Le Mans inspired active wing configuration, and optimized active undertrim air management.

The One:1’s aluminum 5.0-liter V8 engine (with double overhead camshafts; sequential multipoint fuel injection; variable geometry twin turbo chargers; dry sump lubrication; and flex-fuel capability) is similar to that of the Agera R, save for a larger bore and increased bar boost pressure (Bore: 92 mm, Stroke: 95.25 mm). At a speed of 260 km/h, the One:1 can generate 610 kilograms of downforce; at 440 km/h, that number increases to 830 kilograms.

So, in laymen’s terms: the Koenigsegg One:1 is a goddamn sexual Tyrannosaurus. If you don’t know, now you know.