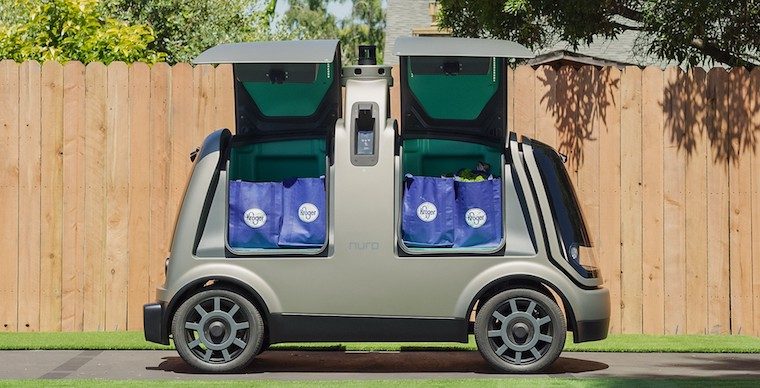 Unfortunatley, the driverless delivery test looks nothing like this.
Photo: Kroger

In June, Kroger revealed its plans to develop a driverless grocery delivery service with startup Nuro. While we knew testing was imminent, we weren’t sure where exactly it would take place. Well, the trial phase has officially begun, and America’s grocer chose Phoenix, Arizona, to host.

Stay Green: Check out why you should buy a hybrid or electric vehicle

While Kroger’s eventual goal is to have cute little autonomous vehicles like the one pictured above deliver purchases, right now the program is running with a standard self-driving sedan. It is monitored by two researchers in the front seat, the passenger with a laptop for performance tracking. Using a mobile app, shoppers order their groceries and select same-day or next-day delivery. According to The New York Times, the service currently costs about $6 per order, a flat rate no matter where in the delivery zone users live.

Kroger is America’s largest supermarket chain, and this move fights back against Amazon’s expansion into its sector with Whole Foods and Prime Pantry. Brick-and-mortar competitor Walmart beat Kroger to the autonomous punch with autonomous cars testing order delivery in Phoenix. Instead of working with a startup, Walmart opted to go to Google’s Waymo for technology. To be fair, the founders of Nuro originally worked for Google, so the basics of the tech are probably very similar.

What Does It Mean? Learn more about the common meanings of dashboard warning lights

Of course, testing is still in the very early stages and there is no set timeline for grocery delivery by self-driving car. If you need groceries now, though, Kroger does currently offer delivery in a vehicle driven by a human at about 40 percent of its stores in the U.S.