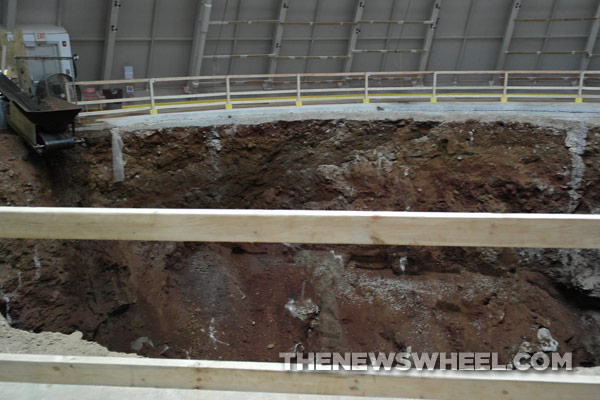 The sinkhole at the National Corvette Museum

Following the crazy appearance of a sinkhole at the National Corvette Museum in February of this year, Corvette fans from around the country flocked to the performance car Mecca to see the damaged Corvettes (eight in total) on display. The board of the museum temporarily kept the sinkhole in the Skydome intact, to demonstrate to patrons the enormity of the natural disaster.

This week, however, is your last chance to see the sinkhole at the National Corvette Museum, as the board has officially voted to fill it in. Ultimately, filling the sinkhole will be cheaper than preserving it, especially as visitors who are there specifically to see the sinkhole begin to dwindle. On next Monday, November 10th, the museum will begin construction on the sinkhole.

If you can’t make it out in time, you may find some solace in knowing that the museum will keep its doors to the Skydome open during the process, so that visitors can track the progress of the construction through a Plexiglas window.

And if you absolutely can’t ever make it out to Kentucky to see the place, then at least consider checking out the sinkhole documentary, which includes behind-the-scenes footage of the sinkhole site.