Last week, Toyota blew our mind by revealing a candid shot of the all-new 2016 Tacoma’s rear end, and we marveled at its taillights, bumper, and ability to go through large puddles. Today, the automaker is going a step further by releasing a tantalizing image of the Tacoma’s front, revealing even more about the redesigned truck. 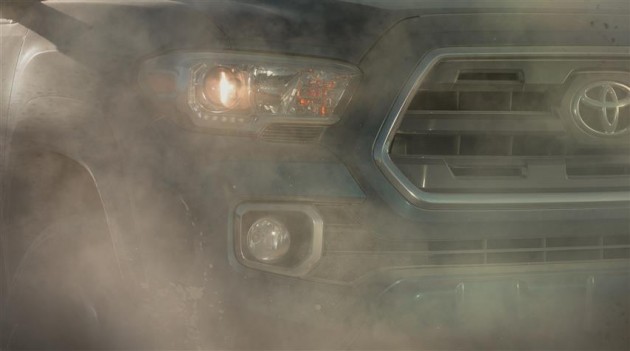 For example, we now know that the 2016 Tacoma will have headlights! Or at least one, on the right side (so we assume there would be a matching one on the left). Underneath the right headlight is a foglight (or possible a daytime running light) and a fancy-looking bumper that’s slightly reminiscent of the 4Runner’s. The 2016 Tacoma will also have both an upper and lower grille, and be adorned with the Toyota badge.

By releasing this latest 2016 Tacoma teaser image, Toyota is leaving us salivating. Although we have less than a month to wait to discover what else the Tacoma has (an engine? Seats?), we just know that month is going to drag by. Luckily, The News Wheel will be covering the Detroit Auto Show, so keep checking back for more details on the Tacoma’s release.