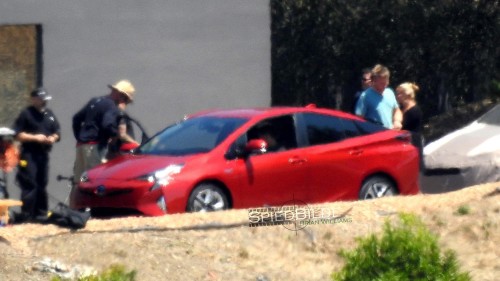 It’s been an exciting year for fans of the Toyota Prius, ever since the automaker announced back in November that the redesigned 2016 model would share parts with the uber-fast and efficient TS040 Hybrid Le Mans Racer. Since then, it seems like we have been subjected to spy shot after spy shot after spy shot (or video), and we still have a couple of weeks to wait until we get to see the official version of the 2016 Prius. The spy shots we came across today show more of the vehicle that we have seen before, and make us truly excited for its September 8th reveal.

Science Lesson: How does the Prius work?

The spy shots, which were uncovered by photographer Brian Williams (not the one from the news), show a red Prius with a more sloping roofline, blacked-out rear roof pillars, lower ground clearance, wraparound headlights, and a stretched windshield. All this information is in line with the sportier styling we’ve been expecting. We also expect this model to be the most efficient Prius ever.

After Toyota officially releases photos and specs, we can expect the fourth-generation Prius to start arriving in dealerships at the end of this year.

Alternative Fuel: The 2016 Toyota Mirai is powered by poop