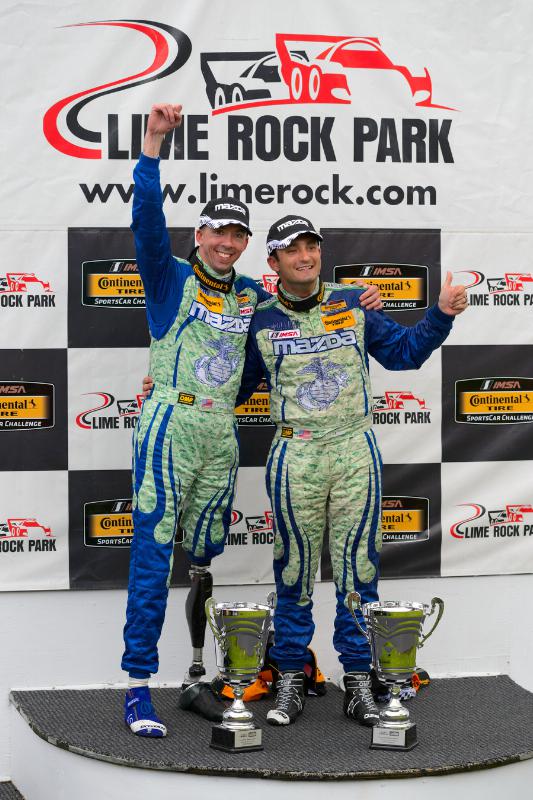 At the IMSA Continental Tire SportsCar Challenge Street Tuner race at Lime Rock last Sunday, the Mazda MX-5 Miata took a 1-2-3 podium sweep for the second consecutive event. While this is nothing short of noteworthy in and of itself, the most amazing part of the story involves the man who took home the top spot for Freedom Autosport: U.S. Marine Staff Sgt. Liam Dwyer.

Liam Dwyer took victory in his second professional race, which was held a mere three years and two days after he lost his left leg when he stepped on an IED in Afghanistan.

“Home track, Memorial Day, my Alive Day … surreal does not describe the jubilation I’m feeling right now,” Dwyer told NASCAR.com. “Memorial Day is not a day that I take lightly. I know exactly what it means to myself and to my fellow service members. To be here in Connecticut, at Lime Rock, at my home track, a place I’ve camped at before…I can’t explain how awesome this feels right now.”

The victory marks the third in a row for Freedom Autosport, and is even more impressive considering the lack of actual prep time involved in getting the MX-5 into track shape. The Miata driven by Liam Dwyer and co-driver Tom Long was built in less than three weeks and hadn’t been taken on any practice runs until the Friday before the race.

Despite starting at the very back of the pack and having difficulty with the driver exchange (due to Dwyer’s prosthetic leg being attached to the clutch pedal), the No. 33 Miata battled its way to first place by the 68th lap and held off the MX-5s of Stevan McAleer and Marc Miller (both of CJ Wilson Racing).

“As our recent Mazda ads have said, it all comes down to Courage, Creativity, and Conviction,” said John Doonan, Director of Mazda Motorsports. “Today at Lime Rock, we had a Mazda story that covered all three. For those who knew the backstory, it brought tears to our eyes.”