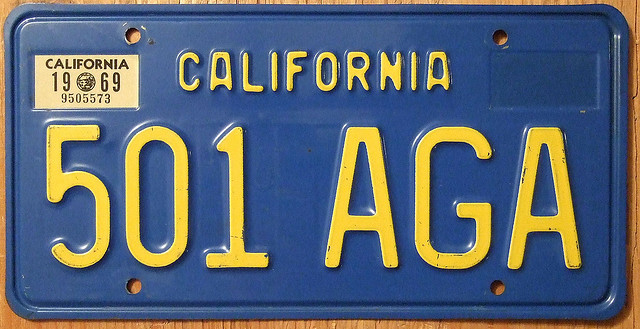 If you drive a car and are following the law, chances are your vehicle has been registered with your home county and possesses vehicle registration plates. These “license plates” are used for identification purposes in places around the world. But, how much do you really know about those mysterious plates on your car?

Is there meaning behind the numbers and letters on license plates?

Yes, the seemingly random serial coding of license plates have specific meaning behind them. Each state follows its own naming system, which can incorporate references to date issued, expiration date, county issuing, vehicle type, and order of issuance (following either ascending or descending order).

Were license plates invented after automobiles were first invented?

Yes, they came about after the first prototypes were created but before motorized vehicles became a widespread form of transportation. The first vehicle identification plates were introduced in Europe (1890s) shortly after the first automobiles were being built but quite a bit before motorized vehicles were common. At the turn of the 20th century, American states began instituting vehicle identification systems.

Do some states not require license plates on the front of the car?

Yes, over the past century many correctional institutions have employed inmates to produce license plates, road signs, furniture, clothing, and other items. This gives convicts skills and work experience for after they are released, and it involves very low wages compared to that work being done by a non-incarcerated worker.

Do US Postal vehicles have license plates?

No, they do not. United States Post Service (USPS) vehicles have their own identification system they follow, which exempts them from parking tickets, municipality fees, etc that would be associated with public plate registration.

Yes, certain words or phrases deemed inappropriate can be–and have been–denied or revoked from license plates. Each state maintains its own list (between 6,000 and 10,000 typically) of the letter/number combinations it considers unsuitable. One of the most infamous cases was a vegan’s vanity plate “ILOVETOFU,” which was taken as a sexually suggestive message. The News Wheel has even investigated which specialty plate messages are banned in Ohio (and the findings are hilarious).

Yes, there have been recorded cases in which certain custom phrases can cause confusion in the system. These typically involve a phrase that’s also used when police are filing a ticket for a car without plates. For instance, plates reading “No Plate,” “Missing,” “None,” or “No Tag” can cause a real problem for policemen filling out the plate ID section of the form.

Making a Difference: What is Hyundai doing through its Hope on Wheels organization?