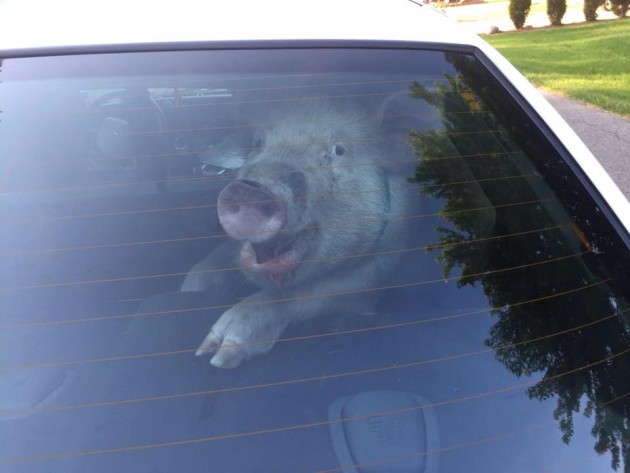 It was around 7:00pm, and the phone rang–a 911 call from a woman who survived a startling encounter just moments earlier. The dispatcher couldn’t believe what was being reported.

There was a pig on the loose in the neighborhood.

A car was dispatched to the scene of the incident. After lassoing the swine with a dog pole, Sgt. Lawrence Rice and Officer Kevin Treworgy transported the “perp” in the back of the squad car. The runaway pig, unhappy with the “crappy” situation, protested by relieving itself in the back seat.

“You would never believe it,” Shelby Township (Michigan) Deputy Chief Mark Coil said in an interview. “Just when you think after 25 years in the business you’ve seen it all, you get a call from a shift commander telling you that we have corralled a pig.”

If you have been following our piggy story, you will get a kick out of this. Officer Treworgy just sent me this "post arrest" video of the "perp". You can hear Tree say something like " yup, that's in my police car"….. Almost like he's trying to convince himself that there is actually a pig in the back of his patrol car. Lol!

Posted by Shelby Township Police Department on Friday, May 29, 2015

The pig in the video above had escaped from a nearby pen and had gone on a tour of the neighborhood. “The owner realized that his pig was missing while we were in the process of figuring out what to do with this animal, he called and said ‘Hey, I think you’re looking for a pig and it may be mine,'” said Coil. “Not that we have pigs running at large on a regular basis, we returned him.” The owner cleaned up the back seat of the cop car.

Needless to say, the Shelby Township Police Department have received many new fans and social media followers after the incident. The department’s original Facebook post received 3,000 likes, 4,000 shares, and 360 comments–including local businesses offering to clean out the car for free. The video of the pig hamming it up for the camera received 57,000 views. The department has even added the above picture as its Facebook page’s cover photo, now referring to itself as “The Pig Pen” (not meant to be a derogatory reference to the police force).

In a follow-up report, the 8-month-old, 170-pound celebrity named Pig Pig is doing fine (apart from a city ordinance banning pigs as pets). “So many people have been coming by who just want to take selfies with her,” said the owner. “We bought a truck and had to have it towed yesterday to the house, and the tow truck driver saw her and said, ‘Oh my God, it’s the famous pig!'”