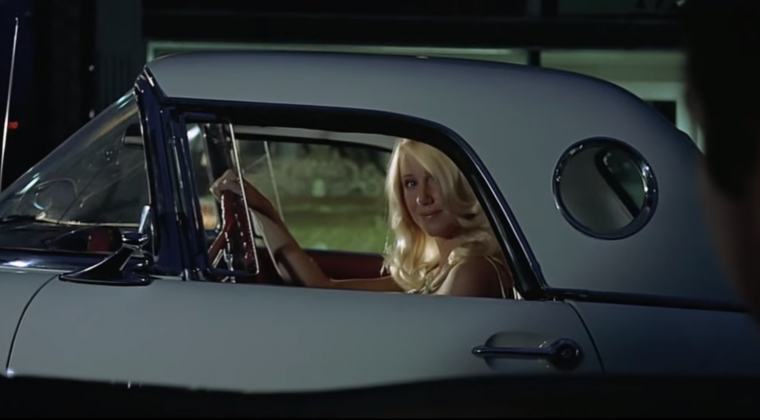 “The most perfect, dazzling creature ever” – Suzanne Somers in a Ford Thunderbird

Today marks the 43rd anniversary of American Graffiti, the greatest movie that George Lucas ever directed (FIGHT ME, NERDS!) and the best film ever made about teen car culture in the early 1960s.

Last year, when Nickelodeon launched a programming block devoted to re-airing 1990s television shows, there was quite a bit of eye-rolling about the fact that millennials were already getting all sentimental over cartoons that were only 15 years old.

But back in 1973, baby boomers were equally enamored with a film that lovingly depicted life as it was merely a decade ago, feeding a late 50s/early 60s nostalgia that led to the creation of retro shows like Happy Days and its numerous spinoffs.

“Where were you in ’62?” the film’s tagline asked moviegoers when it hit theaters on August 11, 1973. The question probably struck a chord with audiences because it highlighted just how much American innocence had been lost in the last 11 years, following the Kennedy assassination, the escalation of Vietnam, the riots of 1968, and the then-ongoing Watergate scandal.

After a decade of upheaval, Lucas’ trifle about kids joyriding in Modesto, California, probably felt like a much-needed throwback to a simpler time. And 43 years later, it still does!

But simply setting the movie in 1962 was not all it took to make American Graffiti a box office hit. The film’s success is built on the strength of its characters. And those strong characterizations are built, in part, on the cars that they drive.

The iconic yellow ’32 Deuce Coupe hot rod is a lot like its driver, John Milner (played by Paul Le Mat)—built for speed but not much else, totally “boss” yet also reckless, and maybe a little past its prime. Similarly, it makes perfect sense that the gorgeous blonde (Suzanne Somers) who Curt (Richard Dreyfuss) becomes obsessed with is driving around in a 1956 Ford Thunderbird; a car as beautiful as it is unattainable for a guy like Curt, who is stuck in the backseat of his sister’s crummy Edsel.

The association between vehicle and personality is so strong in this film that characters can even hide their true selves by assuming the guise of a different automobile.

I’m thinking of the geeky Terry “Toad” Fields, who normally rides an emasculating Vespa scooter when he’s meeting the gang at Mel’s Drive-In. Toad (apparently based on George Lucas’ own nerdy high school persona) is not a smooth operator, but when he convinces his friend Steve (Ron Howard) to loan him his 1958 Chevy Impala, he suddenly has a shot with Debbie Dunham (Candy Clark).

Toad looks almost as unnatural behind the wheel of an Impala as he does trying to buy booze at a liquor store, but his transparent efforts to project a “cool guy” image are ultimately endearing enough to win him the girl.

Ironically, these cars were not quite as appreciated in their own time as they are now. In fact, after production wrapped, all of the vehicles used were put up for sale in San Francisco newspaper ads. The ’58 Impala was the only one to attract a buyer, and he ended up paying less than the asking price.

Now, of course, the vintage vehicles from the film are highly sought-after collector’s items. In fact, the same Impala that sold for a couple hundred bucks forty years ago is now valued at about one million dollars. 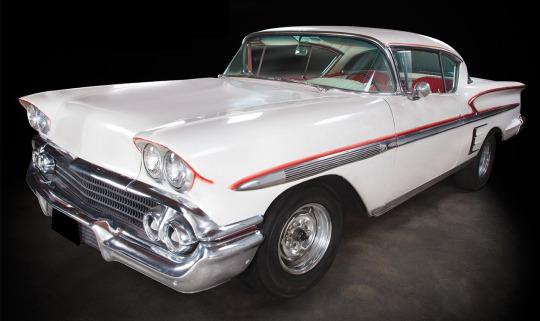 Thinking about Lucas’ use of cars in American Graffiti, and the way those vehicles have grown in collectability over the years, provides an interesting counterpoint to our current culture.

For the film’s characters, cars could alternately serve as status symbols, social objects, and facilitators of sex. For today’s teens, that’s what their phones do.

I don’t mean that as a rant against “America’s youth”—it’s just a statement of fact. Socialization can now be accomplished digitally rather than physically, so why drive?

However, the digital revolution is bad news for the future filmmakers who will want to use period-appropriate props as signifiers of a bygone era. It’s a lot easier to romanticize a ’58 Chevy Impala than it is a sixth-generation iPhone.