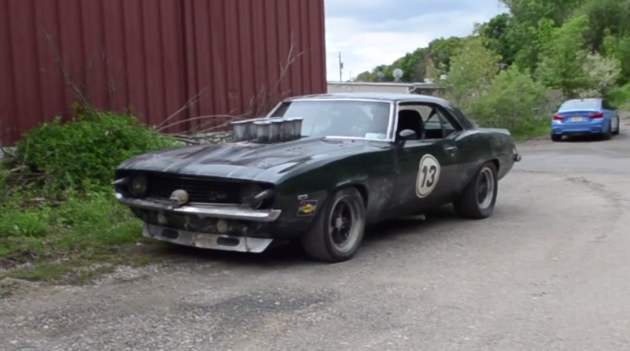 If you haven’t seen Mad Max: Fury Road yet, then stop what you’re doing and go see it. Seriously, quit your job, walk out of the office, and try to catch a 5:00pm showing. It’s that good.

One person who truly understands that Fury Road is a must-see movie is Dirk Vanzuuk, an artist, model car hobbyist, Camaro owner, cancer survivor, and Mad Max superfan. Dirk was so hyped for the post-apocalyptic action film that he bought tickets for the Ozsploitation flick’s New York City premiere. Unfortunately, life threw a wrench into his plans when he was diagnosed with cancer, necessitating aggressive radiation treatments.

Dirk told his doctor he really wanted to make it to the big premiere, but unfortunately, wasn’t well enough to travel when the time came. But he was well enough to attend the movie’s opening weekend with his wife Patti, and did so in serious style…

According Road and Track, Dirk’s Camaro has a 383 cubic inch displacement V8 engine that puts out 500 horsepower and 450 lb-ft. Those velocity stacks on the Camaro’s hood are actually plastic solo cups that have been spray-painted all shiny and chrome, ready for entrance at the gates of Valhalla! WITNESS THEM!!

The skull and spikes on the grille are a very nice touch, as well. You can see more pictures and read Dirk’s full story over at Road and Track. It’s always great to read a nice feel-good story… especially one that involves a classic ’69 Camaro with a badass Mad Max look.