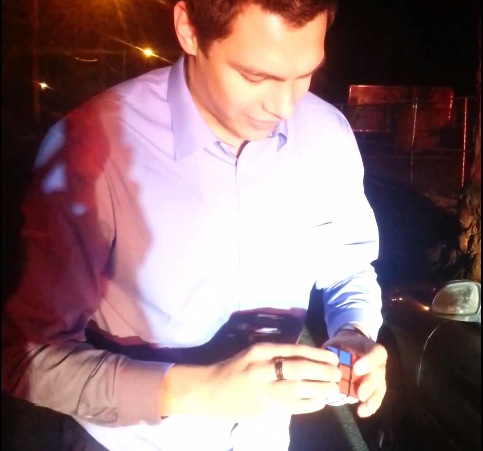 You’ve probably been in a situation before where there are red and blue lights whipping around in your rear-view mirror and you’re sitting in the driver’s seat biting your nails and thinking “okay, I’m pretty sure I can talk my way out of a speeding ticket if I’m smooth enough.”

Apparently, if you’re Steven Brundage and you’re in a situation where the cops are trying to give you a ticket for speeding, you think “oh, well I’ll just do a bunch of magic tricks and no problem.” At least that’s what you’d think if you were Steven Brundage  and the video below was a thing that actually happened and not likely a viral stunt that you came up with:

From the description to Brundage’s YouTube video, titled “Magician gets out of Speeding Ticket with Magic!” (because he has an apparent fascination with referring to himself as a magician):

December 5th around 3am I was pulled over doing 42 in a 30 MPH. I told the cop I was coming from a Holiday Party in NYC. He asked why I had all the cards in my car and I told him I was a magician. He then asked me to show him a magic trick.

We’re honestly surprised that Brundage survived this encounter with that line of questioning, if only because the last time someone asked if we wanted to see a magic trick, this happened:

Full disclosure: we’re fairly certain this is a staged bit, if only because half of the video is shot from the perspective of the police officers. Filming a speeding suspect with their own cell phone, using foul language in the line of duty, and generally not taking a traffic stop as a serious matter is quite likely behavior that could very well see them facing strict and severe disciplihahahahahahahaha.

Perhaps it’s a somewhat clever viral marketing spot for the new and improved Rubik’s Cube (NOW: CUBIER THAN EVER BEFORE). Perhaps it’s a bit to endear the American public to police officers again (good luck with that). Or, arguably the most likely reality, this is simply a quick-and-clever concoction by an unknown magician to get his name out there by going viral.

Well, if it’s the latter, that will never work, because people these days are too smart to fall for…oh, we’re writing about it right now, aren’t we?

Hm. Maybe Brundage isn’t too bad at sleight of hand.

More Automotive News: A Range of New Mitsubishi Products Are Coming Our Way