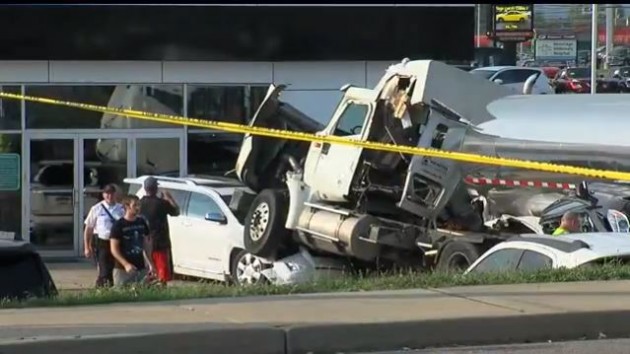 Thomas Young, 58, of Royal Center, Indiana, crashed his milk tanker truck into an Hermitage Buick–GMC–Cadillac dealership on Sunday, damaging 23 new cars in the process. The reason for the accident? Young says he was choking on a sip of Dr. Pepper.

Police say that Young was traveling north on N. Hermitage Road when he took a fateful sip from a can of Dr. Pepper. This caused Young to choke, which led to the truck leaving the road, jumping a curb, and rolling down an embankment leading to Montrose Buick-GMC-Cadillac. The truck smashed into several vehicles, resulting in varying degrees of damage to 23 different vehicles. Coincidentally, Dr. Pepper boasts 23 different flavors. Oh, universe.

The accident occurred on Sunday, meaning that no one was present at the dealership at the time. Young was uninjured in the accident, but he probably won’t be drinking Dr. Pepper again for a little while.

Young was cited for reckless driving, and the dealership opened up the following day for Labor Day. COMMERCE MARCHES ON.