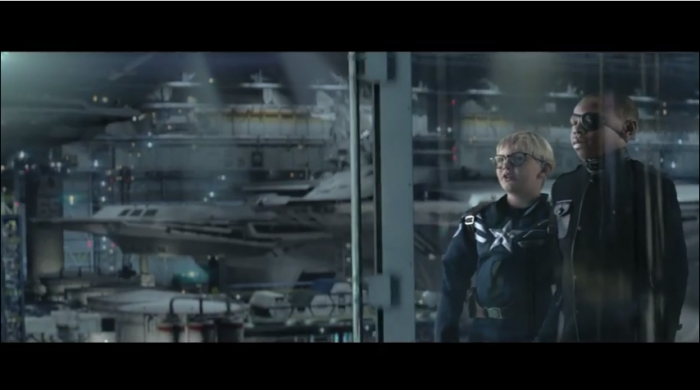 Marvel and Chevrolet seems like a match made in heaven: both brands have been on fire, both have scored major points with critics and audiences alike with their most recent releases, and both are soon releasing products that the public is dying to see.  So it only makes sense that they would join forces for the Captain America: The Winter Soldier advertising campaign, which will also serve to promote Chevy vehicles such as the 2014 Traverse.

The first ad in the campaign (seen above) is entitled “Captain America: All in a Day’s Work” and recasts the rolls of iconic Marvel characters—such as Black Widow, Nick Fury, and ol’ Cap himself—with child actors. The results put forth from Marvel and Chevrolet are exciting, adorable, and pretty durn funny.

Of course, the reimagination of the trailer for the forthcoming Captain America sequel only goes as far as mom allows. The 2014 Chevrolet Traverse plays the hero vehicle of the ad, which was directed by Captain America: The Winter Soldier directors Anthony and Joe Russo.

In addition to the Captain America: The Winter Soldier campaign aspects that began airing this weekend, the new Chevy Corvette—winner of almost as many awards as Wolverine has outfits—features prominently in the upcoming film as the primary ride of Black Widow (Scarlett Johansson).

Are you looking forward to the next Captain America film? Leave us a comment and let us know!