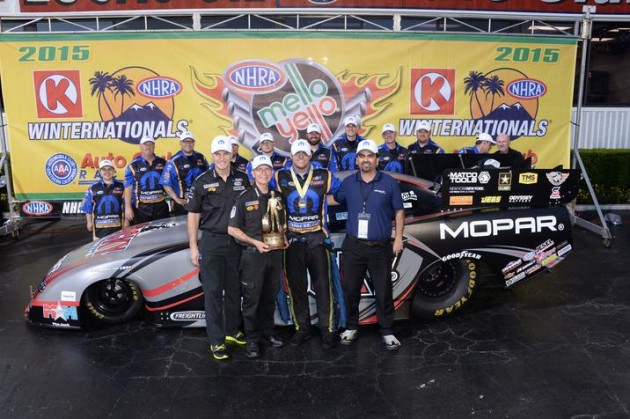 Matt Hagan took the all-new 2015 Mopar Dodge Charger R/T NHRA Funny Car to victory in its debut race yesterday, even against insurmountable odds. Things looked bleak for Hagan on Friday when his Charger’s engine exploded during qualifying, forcing him to switch to a 2015 Mopar Express Lane/Rocky Boots Dodge Charger R/T body. They didn’t get much brighter on Saturday when rain kept Hagan at the number 12 position in the All-Mopar NHRA Winternationals event.

But somehow, the two-time and defending champ prevailed once more. Miraculously, Hagan took the Charger R/T to four round victories, including wins over Tony Pedregon, John Hale, Del Worsham, and Ron Capps, his own teammate, in the final round.

That final round was an incredibly close one, too. Hagan finished in 4.011 seconds at 320.89 mph with Capps hot on his heels at 314.90 mph, with a 4.078-second finish time. This was Hagan’s strongest performance of the event.

“Congratulations from everyone at Mopar to Don Schumacher Racing for putting two new vehicles into the final, and to Matt Hagan for driving the 2015 Dodge Charger R/T to the winner’s circle in its debut,” said Pietro Gorlier, the president and CEO of Mopar Brand Service, Parts and Customer Care. “What a great way to reward a year’s worth of time, investment and hard work that went into the extensive process of designing and building a fantastic new 2015 Mopar Dodge Charger R/T Funny Car. To have both the new Dodge Charger and the Dodge Dart win Wally trophies in both of their first times on track in the past year is a testament to Mopar’s ability to provide quality products. This is also a fantastic way to follow up on Matt’s 2014 NHRA Championship and we appreciate the team’s efforts in working to defend that title this season.”