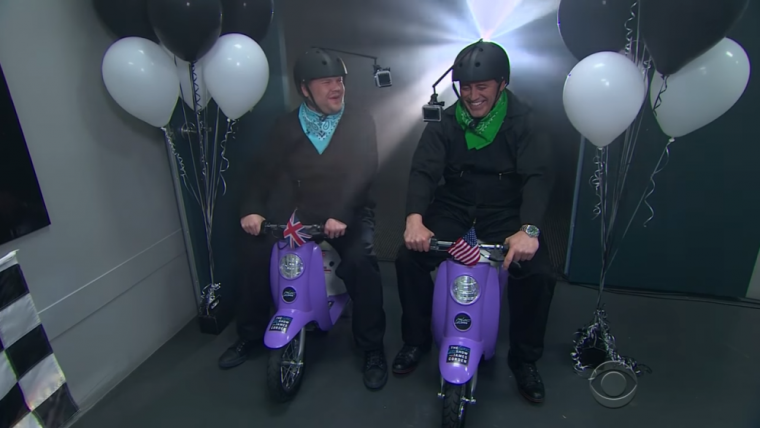 Matt LeBlanc paid a visit to The Late Late Show last night to talk about the latest season of Top Gear and his love for cars. He seemed much more relaxed and natural than he ever does in the Top Gear studio, and talked about the fun that he has making the episodes and spending so much time behind the wheel. To make the visit even more fun, James Corden decided to not invite LeBlanc into his SUV for a round of Carpool Karaoke, instead opting for a new segment.

Take On The Competition: Check out the 2016 Nissan 370Z and its powerful features

Reggie Watts, the program’s bandleader, introduced the race as Bottom Gear, and LeBlanc and Corden made a dramatic entrance in their racing suits and helmets fitted with GoPro cameras. Both men were astride tiny purple motorized scooters that are clearly meant for children. When the checkered flag dropped, the two racers tore off through the halls of The Late Late Show to encounter many obstacles on their way to the studio. While Corden led for most of the race, in the end LeBlanc pulled away to cross the finish line first. Take a look at the race in the video below to see all the excitement (and try to decide which racer is cursing like a sailor).

Share the Road: Learn more about how to properly drive on the road with bicyclists

James Corden had a lot of questions for LeBlanc in the interview portion of the show, since as a Brit he is very familiar with the Top Gear franchise, and actually drove the show’s course as a Star in a Reasonably Priced Car. LeBlanc was also a Star in a Reasonably Priced Car, and part of the reason he was considered for his current hosting position was because he was the fastest star to ever take to the Top Gear track. Since the car is now a rally car (and not that reasonably priced), LeBlanc offered that Corden should give the track another shot.

Take a look at the interview portion of the night in the video below, including Matt LeBlanc’s stories about his first hours behind the wheel as his grandfather worked the pedals.

I hope that James Corden takes the new Top Gear rally car out for a spin soon. While he’s not very confident in how well he would do, anyone has to be better than Jesse Eisenberg, the current last place finisher on the chart.