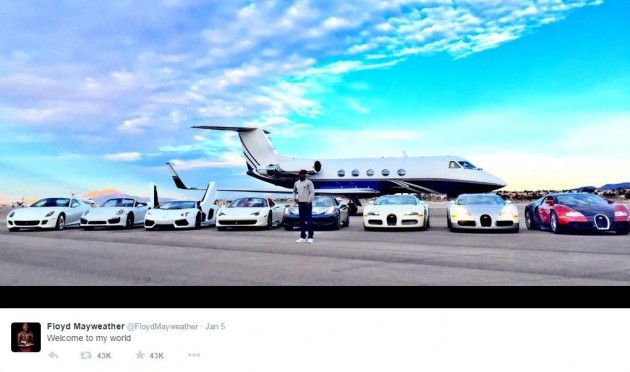 Boxer Floyd Mayweather Tweeted this photo with the caption, “Welcome to my World”

Most boxing fans know Floyd Mayweather is the richest fighter in the world, but have you ever wondered what he does with all that cash?

Mayweather gave everyone an inside look at his lavish lifestyle on January 5th when he tweeted a picture of himself in front of his very own personal jet and eight luxury vehicles. Business Insider reported the value of those cars to be almost $6 million.

Mayweather used to go by the moniker “Pretty Boy,” but switched his nickname to “Money” to better reflect his expanding bank account. It was estimated that he earned a staggering $200 million paycheck from his recent fight with Manny Pacquiao.

But those aren’t all the expensive cars the fighter owns. In one YouTube video (see above), the champion shows off his Las Vegas home, where he takes ESPN personality, Stephen A. Smith, to the “Million Dollar Garage,” which Mayweather said features another $6 million worth of vehicles.

Mayweather has accumulated his money by going undefeated in the boxing ring. He has said he wants to fight once more before he officially retires, and it’s sure to be another huge payday.

With all that cash coming in, one can’t help but wonder what car he could possibly buy next.