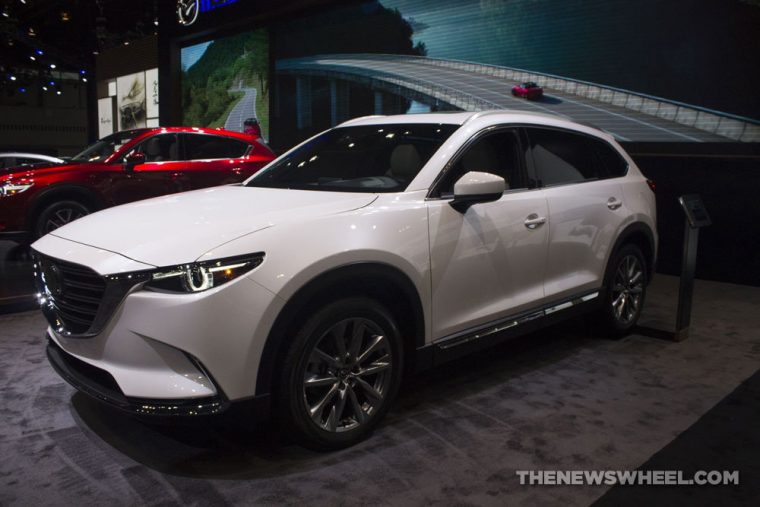 Last year, Mazda unveiled its newly redesigned CX-9, putting a new, more attractive face as well as a much-overhauled design onto its largest SUV. At the time, the new SUV was offered at a starting MSRP of $31,520, with the usual three trim levels of Sport, Touring, and Grand Touring, with the addition of a high-end Signature trim level.

Looking Good: Mazda is the EPA’s most efficient automaker, again

So, now that Mazda’s new SUV is returning after a very successful first year of sales (in which, remarkably, about half of all sales were of the highest Grand Touring or Signature trim levels), Mazda has announced that the CX-9, for the 2017 model year will be coming with a starting MSRP of…the same thing: $31,520 at the base.

On the more interesting side, Mazda announced that the mid-level Touring level will be getting Smart City Brake Support as a standard feature.

Other than that, unfortunately that’s it. The CX-9 has seen plenty of success, pulling in several prominent awards, including the title of Full-size CUV of Texas at the 2016 Texas Truck Rodeo. Apparently, Mazda sees the current path the CX-9 is on, and likes it pretty well, so they are just going to kind of keep it going.

Winning Still: The CX-9 is on the short list to win World Car of the Year

“We are seeing a considerable number of new Mazda buyers come in from premium and luxury brands, with CX-9 Grand Touring and Signature models regularly being cross-shopped with the likes of Lexus, Porsche and Volvo,” said Tetsu Nakazawa, vehicle line manager for crossover SUVs, MNAO. “That consumer confidence illustrates the strength of CX-9’s design, quality and engineering innovations.”

In any case, if you would like a full pricing breakdown, check out this handy chart, provided by Mazda. Add $200 to that total if you would want your CX-9 in Snowflake White Pearl Mica, or $300 if you would like it in Soul Red Metallic or Machine Gray Metallic. 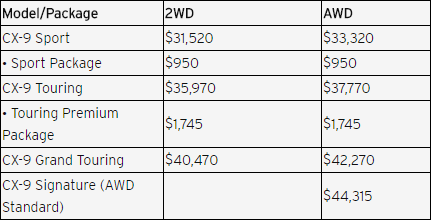