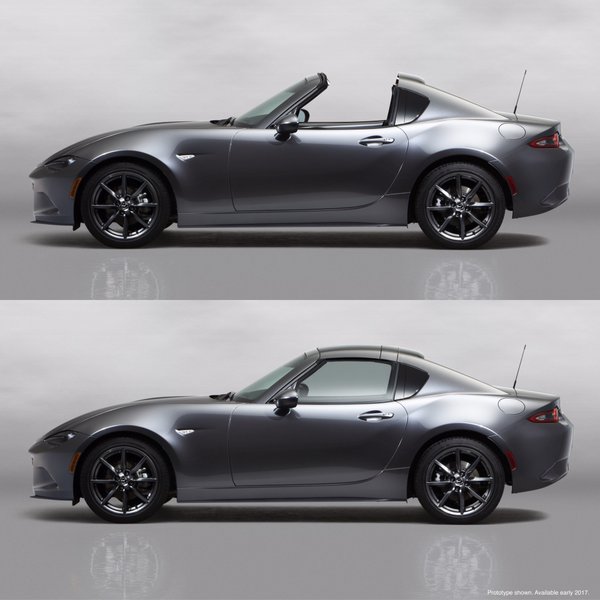 Prospective buyers are now one step closer to having a MX-5 RF in their garage, as Mazda has officially announced pricing for the 2017 MX-5 Miata RF during the Miatas at Mazda Raceway event.

The MX-5 RF will mostly come with features already on the cloth-top model, but there will be a few new things. First, the RF will include a 4.6-inch full-color TFT gauge, and then buyers will have the option to paint their new MX-5 Machine Gray Metallic rather than the old Meteor Gray Mica.

Mazda also announced that there would be some small changes to all 2017 MX-5s, in the movement of Blind Spot Monitoring and Rear Cross Traffic Alert to standard on all Club (the lowest trim level) models, regardless of roof option—before, these systems were only available for Grand Touring models.

Anytime Is Good: It’s never a bad month to learn about baby safety in the car

The MX-5 RF will come in three trim levels, including the Launch Edition model. At the base is the Club model with a six-speed manual for $31,555 (or $32,285 with an automatic), with an optional Brembo/BBS Package for manual Club models for $3,400.

Finally, at the top you have the Launch Edition for $33,850 with a manual transmission or $34,925 with an automatic. The Launch Edition is still available, while supplies of the 1,000-car allotment last.

All three trims (assuming there are any Launch Editions left) will be on sale at dealerships in early 2017.