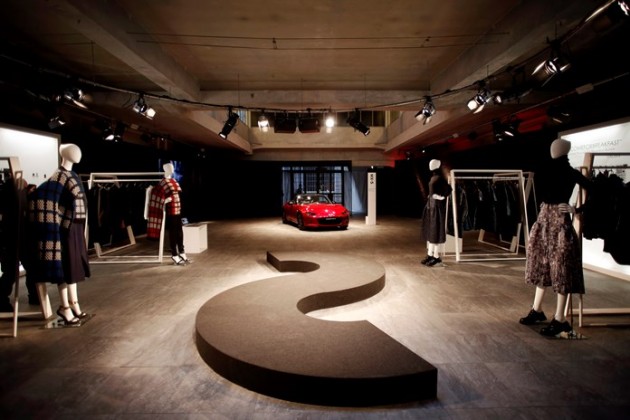 Mazda will be returning to Italy this April to participate in the biggest design festival, Milan Design Week, which draws the creativity of numerous artists, architects, labels, and visionaries.

This year, Mazda will be a main sponsor of the Brera Design District’s Fuorisalone event (part of the Milan Furniture Fair). But the automaker’s participation isn’t limited to mere sponsorship–it will be actively participating through its the Mazda Design Space, a new venue which opened in February in the Brera quarter.

The inaugural exhibit at the Mazda Design Space, titled “Fashion and Design: A unique Italy/Japan collaboration in support of talented designers,” was hosted by Vogue Italia. Two up-and-coming fashion labels displayed their interpretations of KODO through two unique outfits, which were showcased next to the new MX-5.

“These activities in Milan are an excellent opportunity to learn from different fields of design,” said Mazda Motor Europe’s Vice President of Communications Wojciech Halarewicz. “From furniture to fashion and more, Milan is a world design capital. There is no better place to explore creativity and apply our KODO design theme to other disciplines.”

Mazda isn’t a stranger to the world’s largest design event. The brand unveiled a provocative, futuristic chair designed around Mazda’s KODO design language–the automaker’s first application of KODO-Soul of Motion outside vehicle design. That chair will return this year to the Mazda Design Space, accompanied by several other KODO-inspired pieces.

“Mazda is addressing a broader world at Milan Design Week. We’re here to share our creative vision and expand our horizons, to be inspired in such a stimulating environment and, I hope, inspire others,” says Ikuo Maeda, who was in charge of KODO’s development.

Despite only being introduced in 2012, Mazda’s KODO-Soul of Motion design philosophy has won the company multiple awards for its movement-oriented beauty.