With 65 Years on the Job, Willie Fulton Jr. is Ford’s Most Senior Employee

Willie Fulton Jr. has been working at Ford for 65 years

Ford is celebrating 100 years at its Rouge complex, which now has the honorable distinction of being the only American vehicle manufacturing facility to operate for a consecutive century. While celebrating this particular milestone, Ford also shone a spotlight on another, no-less-impressive feat: The 65-year career of Willie Fulton Jr., its longest-tenured employee.

Willie, 83, started at Ford River Rouge Complex on July 15, 1953, earning $1.58 an hour as a machine operator. He’s been a part of the team at Dearborn Stamping Plant since 1982, and today works four 10-hour shifts every week on a parts line.

Over his 65 years at Ford, Willie has worked on everything from the Ford Thunderbird and Tractor to the Ford Mustang and F-150. He says that he wouldn’t have stayed with Ford for as long as he has were it not for the close-knit camaraderie with his co-workers and the sense of family provided by the company at large.

“Studebaker, Packard, they’re no longer around because they were a corporation,” Fulton told The Detroit News’ Ian Thibodeau. “There was no family to keep them around. Ford is a big company. And a lot of people in Dearborn survive off what Ford does.”

Fulton’s workday begins at 4 a.m. with a breakfast of toast, coffee, oatmeal, and vitamin B12. He leaves for the factory at around 5:15-5:20 a.m. and gets to work just around a quarter ‘til 6 a.m. On the one hand, you absolutely have to admire the man’s dedication and drive. On the other, yay capitalism, it sure is super great. 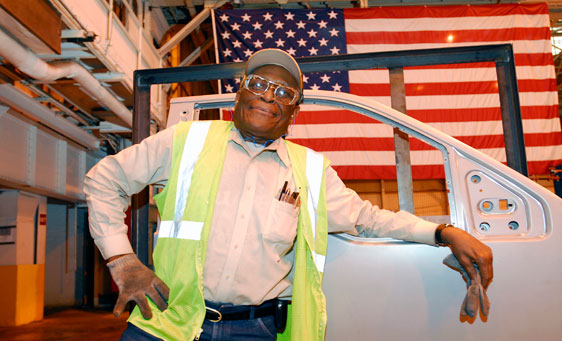 Willie Fulton Jr. is a prototypical example of the hard-working American, and, hey, here’s an idea for Ford: Why not give the guy a hefty and quite well-deserved retirement bonus so that he can enjoy the golden years of his life in a tropical paradise somewhere? You could probably carve a decent chunk out of the $16.7 million that CEO Jim Hackett made in 2017; I’m sure he’ll survive just fine, even if he’s gotta tighten his $700 alligator leather belt a loop or two.