The Miata 25th Anniversary Edition will be limited to 100 examples, which means you better get on it if you wanna get hold to one. 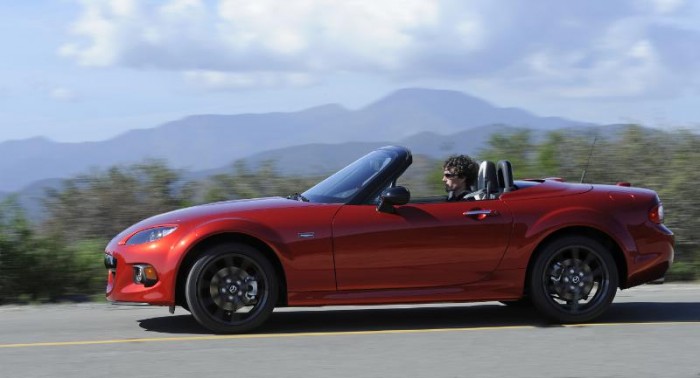 It’s hard not to feel a little bit disappointed by the fact that Mazda didn’t break out a brand new Miata (although we did get a peek at its chassis, which is still pretty nice). Mazda didn’t totally leave MX-5 junkies out in the cold, however, unveiling the MX-5 Miata 25th Anniversary Edition during the first day of the 2014 New York International Auto Show.

The Miata 25th Anniversary Edition will be sold as a 2015 model and will be limited to a mere 100 examples in the United States. So, you know, if you want one, you might want to hustle up.

“The original concept behind the MX-5 was so simple: to offer the pure joy of a lightweight sports car that moves precisely as the driver intends,” said Takashi Yamanouchi, chairman of the board, Mazda Motor Corporation, in a statement.  “While responding to increasing safety and environmental requirements, in the 25 years since its launch we have had to continually reinvent the MX-5 – far beyond a simple evolution – in order to stay true to that original ideal.  The history of the MX-5 is one of changing everything in order to stay the same, a history of innovating in order to preserve.”

So what makes the Miata 25th Anniversary Edition so unique? Mazda calls it a heartfelt “thank you” to Miata enthusiasts, with a meticulous eye paid to details both inside and out. The special edition MX-5 will get a Soul Red metallic premium paint scheme with Brilliant Black A-pillars, windshield surround, outside mirrors, and Power-Retractable Hard Top (PRHT). The contrast of black against the Soul Red is continued with black front combination lamp bezels and 17” Dark Gunmetal 10-spoke aluminum alloy wheels hugged by Bridgestone® Potenza RE05A 205/45R17-84W tires.

The red/black theme also carries over into the interior, which uses satin chrome finish on the louver rings, gauge cluster meter rings, and inner door handles. Brilliant Black is also utilizes in the seatback garnish with Piano Black spokes for a steering wheel wrapped in genuine black leather. The parking brake level, armrests, and shift lever will all also be wrapped in black. Red stitching will be used at all premium touch points.

Naturally, the Miata 25th Anniversary Edition will have signifying badging, with the logo etched into the leather headrests and on the stainless steel door scuff plates. A single 25th Anniversary badge will be mounted onto the driver side front fender with a serial number.

The Miata 25th Anniversary Edition is expected to go on sale later this spring and can be pre-ordered at www.MazdaUSA.com.

Stay tuned to The News Wheel for more images and information as it becomes available.

So, tell us: how bad do you want this?