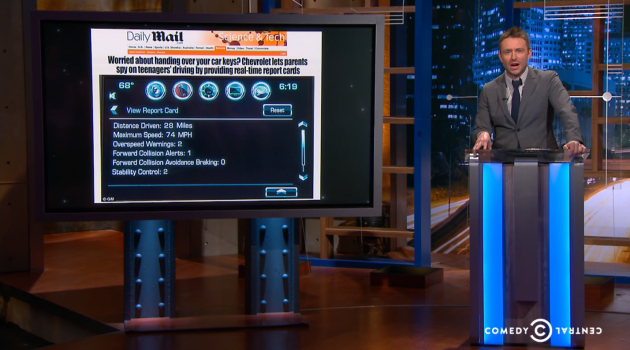 Yesterday, Chevrolet announced that the upcoming 2016 Malibu would be equipped with an industry-first safety feature called the Teen Driver System, which, among other things, will provide a “report card” to parents telling them whether or not their teens were speeding while behind the wheel.

Or, as host Chris Hardwick described it on last night’s @midnight: “Just when you thought the status symbol that is the Chevy Malibu couldn’t get any more rad, they’ve introduced a feature to this 2016 model that’s taking things to the next level of parenting!”

As far as Hardwick is concerned, the new teen safety system is nothing more than a “GAHT-DAMNED NARC” that will keep teens “safe on the streets and unpopular in the sheets.” He then asked comedians Fortune Feimster, Ben Gleib, and Moshe Kasher to describe what kinds of lame, tattle-tale features their parents would have wanted for their cars back when they were teens, which led to the NSFW-ish (though pretty funny) responses above.

On a side note: now that we’ve given @midnight this shout-out, maybe they’ll finally favorite one of our tweets the next time we play #HashtagWars.