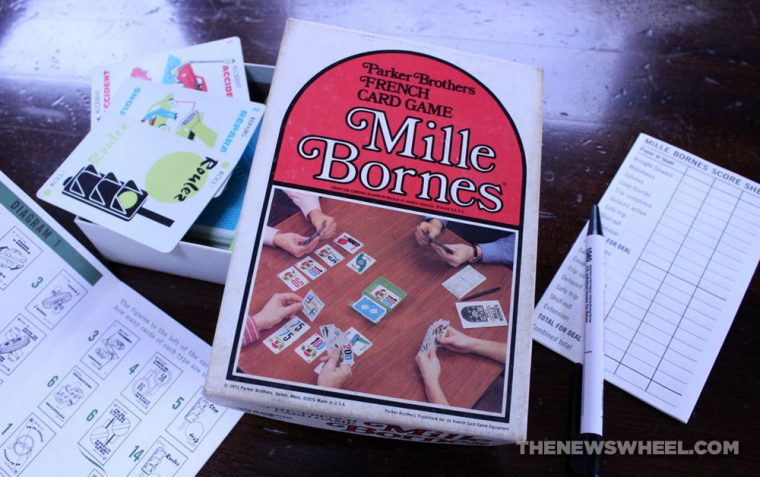 It’s a disheartening truth that card games simply aren’t as popular as they used to be. Despite the golden age of tabletop gaming we’re in, the vast majority of people do not play cards like they did 50 or 100 years ago. Families aren’t hosting weekly bridge, canasta, or pinochle gatherings. Many in today’s generation have not experienced the joy of playing casual, social card games. But with the wealth of classics that have been developed over the years, there are many worth teaching.

Mille Bornes (pronounced meel-born), a classic card game of French origin, might not be as challenging or strategic as contemporary card games are, but it was quite innovative in its time.

I didn’t grow up playing Mille Bornes with my family like some people did, but perhaps it’s time I learned this automotive-themed game. 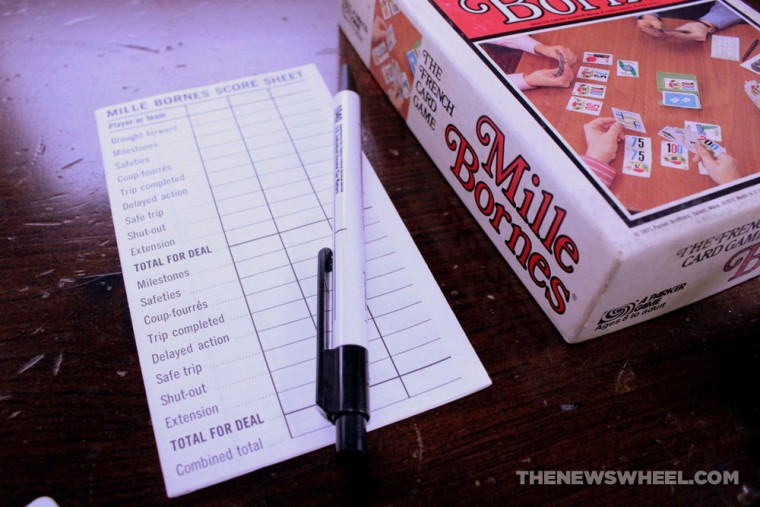 Experience the Thrill of Racing at Home: Read our review of a great NASCAR board game

1,000 Bornes was created in 1954 by Arthur (“Edmond”) Dujardin, a French author who designed several automotive-themed games. The name supposedly came from the distance of the Route Nationale which runs from Paris to Italy. 1,000 Bornes was based largely on the 1906 card game Touring with added elements and stylish card designs by artist Joseph Le Callennec.

After selling a million units in Franch during the 1950s, Dujardin licensed the game for distribution in England, Italy, Germany, and North America. Throughout the years, the designs have been updated in subsequent editions but the game play remains mostly unchanged. 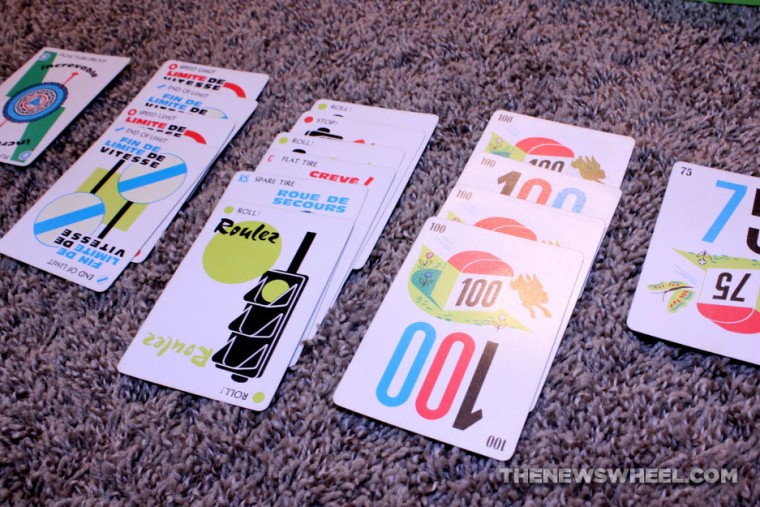 The object of Mille Bornes is to travel the furthest distance (the goal being 1,000 km or miles exactly) by drawing and playing cards that represent a road trip in an automobile. The further you travel, the more points you accumulate to beat opposing players. Multiple rounds can be played.

After the deck is shuffled and six cards are dealt to each player, each participant creates a tableau by laying battle, speed, distance, and safety cards in front of themselves or their opponents.

Players can further their own distances by playing distance/mileage cards of varying amounts (25, 50, 75, 100, 200), thwarting opponents by playing various hazards, or remedying hazards that were played against them. For instance, one player can be given a flat tire until they replace it with a spare. The most popular aspect of Mille Bornes is the coup-fourré, which allows players to play special safety cards that immediately counteract hazards.

The speed limit can also be changed, limiting the distance cards that can be laid. If you exhaust the draw pile before reaching 1,000 km, the round ends. When scoring, points are given for distance traveled, completing the journey, playing safety cards, and other factors.

Most Mille Bornes instructions recommend playing the game in teams of pairs, rather than four competing players. However, it can also be played with two, three, or five participants, too. 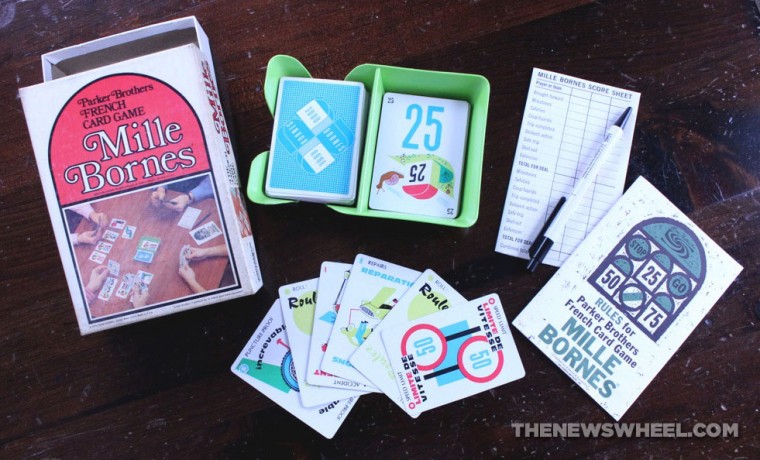 The deck consists of hazard, remedy, safety, and distance cards. Depending on which edition you play, many of these cards are bilingual, printed also in original French.

The older editions of the game are held in higher regard as they retain the original designs and still hold up to wear even today. I played the gorgeous 1971 boxed version that retains the French terms and Joseph Le Callennec’s iconic artwork. It exudes its time period with its color choices, diagrams, mile-markers, and wacky animals. Honestly, who doesn’t love the duck?

The better game editions come in a box or tin rather than a flimsy card sleeve. The card tray is nice but unnecessary to game, as are score sheets if you have pen/paper. The heaviness of the card stock varies depending on the age and price you pay for the game. The older or more expensive, the better quality you get. 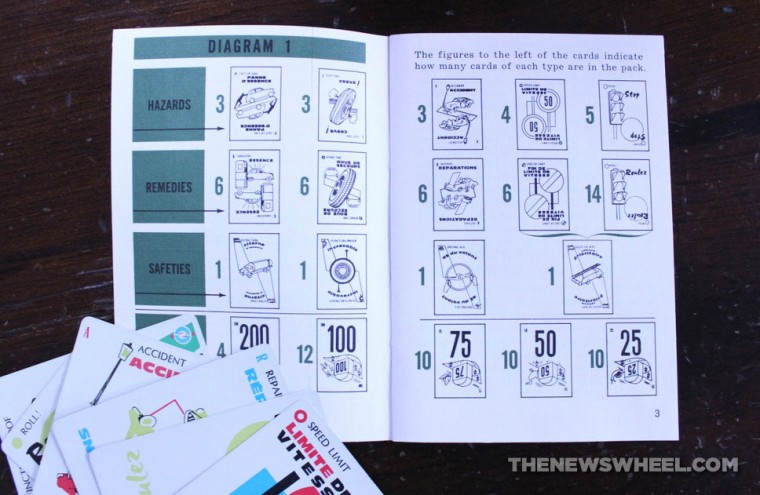 Mille Bornes is not a difficult game to grasp once you see how it’s played. Unfortunately, the instructions are poorly written and unorganized in most editions. The best way to learn is to watch a video online of someone teaching it or have a friend explain it. Otherwise, you’ll get lost in the non-sequential turn instructions and frequent supplemental diagrams.

The game can be played by anyone, without needing a real strategy to participate. There is a little strategy in knowing when you play your cards, but it largely depends on what cards you draw when—a chance element that can make the game lose all momentum. For example, if you keep drawing low distance cards, you will have difficulty accumulating high mileage. If you aren’t lucky enough to draw remedy cards to fix hazards, you’ll be stuck drawing cards until you find the right one. 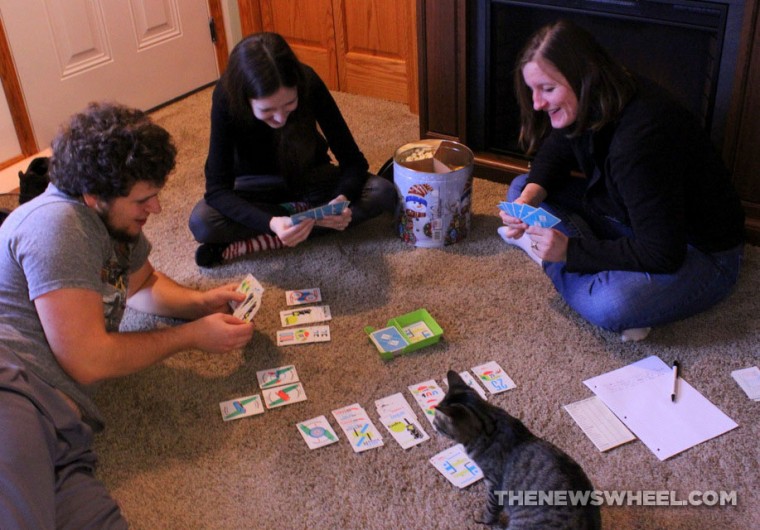 Your experience playing Mille Bornes can drastically change from round to round. Sometimes the hand will be fast-paced and surprising; other times you will be stuck waiting for a necessary card. It’s not a consistently pleasing game, but when it works, it’s a lot of fun. When I played with my family, it worked. It was quick, dynamic, challenging, and didn’t take too long. 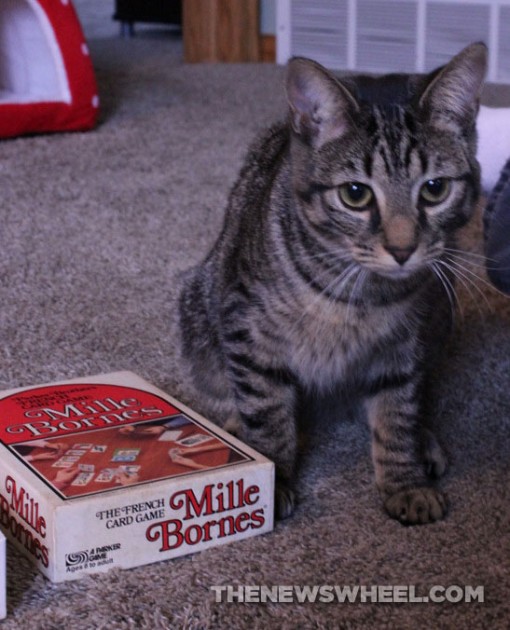 We played in partners, which definitely makes the game progress at a faster pace. If you don’t have a card you need, chances are your partner will bail you out. Plus, you and your partner can play two different strategies (offensive & defensive) simultaneously. Having to score 1,000 miles exactly might seem frustrating but gives opposing players a chance to catch up and avoid boring shut-out games. The deck is balanced, though, and you usually get the cards you need.

Much of the appeal of Mille Bornes comes from speaking the classy French terms and the nostalgia of playing it at a younger age. Unfortunately, both of those aspects are lost on future players who only know the dumbed-down editions which are only in English. If you’re going to buy the game, look for a bilingual release.

Mille Bornes has been overshadowed by far more clever and interesting games over the past decades, and its simplicity shows its age. Still, it’s a fun, thematic filler game that you can still give some nostalgic appeal by playing with your kids now.

Mille Bornes is available in stores or online at Amazon, Wal Mart, Target, Game Board Geek, and other retailers.