Missing Seeing the Mazdas at the Chicago Auto Show? We Have Your Back

The Chicago Auto Show has begun, which for many people means one thing: feeling kind of sad that you didn’t get to go. This can be especially true for Mazda fans, even though the Zoom Zoom brand didn’t really bring anything new to CAS this year.

Fortunately, The News Wheel’s team was in the Windy City for two days, so with the magic of the Internet, we can give you a small taste of the Mazda-y goodness that you are missing (although, for the real deal and to see all the Mazdas, you will still need to pick up some tickets and head to the show yourself).

First, you have the ever-popular MX-5 Miata, in its latest form as the Retractable Fastback. Our own Patrick Grieve got to take one for a spin around a garage (an automatic model, probably to keep some inexperienced journalist from smashing the gears).

Despite the very limited driving environment that prevented a good driving test, you have to admit that the little roadster looks pretty amazing in Soul Red. Of course, inside the show, Mazda also brought its new signature-colored Machine Gray Metallic MX-5 RF. 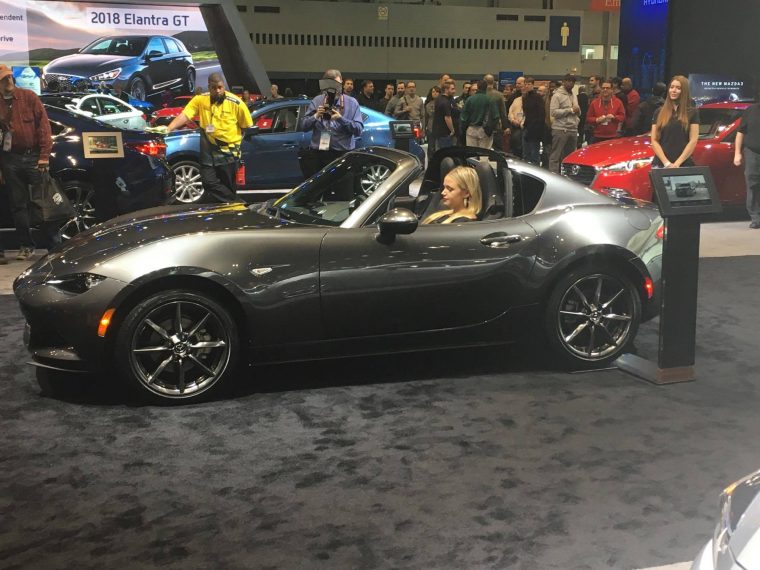 On top of that, Mazda once more broke out its two biggest MX-5 concept cars, the Speedster Evolution and the Spyder, both still looking mighty fine after their initial introductions at SEMA in 2016 and 2015, respectively.

Then, of course, we got another look at Mazda’s most recently-redesigned crossover, the CX-5, first unveiled in LA back in November.

For the rest of Mazda’s displays, I’m afraid that you will have to go see them for yourself. However, we have your back here, too, with information on special ticket prices, where you can park, and where you should eat.