Kia has revealed that the spokesman who has been tapped to help them in introducing the all-new K900 rear-wheel-drive luxury sedan to an unsuspecting audience…is Morpheus from The Matrix. We know, we know, it’s not really exactly what you’d call a current character, but Larry Fishburne’s all-seeing and all-knowing wise man is still an easily-recognizable pop culture icon—particularly when Kia’s agenda seems to be pulling back the curtain to reveal what’s real in the luxury segment. 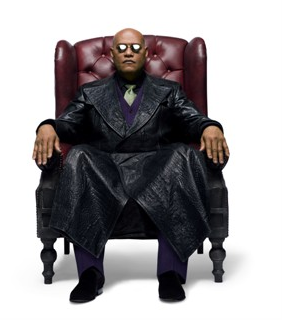 Morpheus from The Matrix

The official K900 Super Bowl ad is already available for viewing over at  www.Kia.com/K900-SuperBowl and features Morpheus confronting a couple at a valet stand. Akin to the famous red pill/blue pill scene from the 1999 film, the mirror-shaded master offers a blue key to “go back to the luxury you know” and a red-tagged key for the K900 that ensures “you’ll never look at luxury the same again.”

While you can pretty well imagine what choice the couple makes, the commercial takes something of an unexpected turn when Morpheus decides to sing “Nessun dorma” from Turandot. This causes lesser cars to levitate, spoons to bend, and streetlights and 30th story windows to shatter.

Yeah, we’re not sure how any of that makes the faintest lick of sense, but it’s certain to draw plenty of attention.

The “Introduction” spot, set in The Construct, offers a more straight-forward approach: just Morpheus, that sultry baritone, a worn red leather chair, and plenty of money shots of the K900 and its interior.

You’ll be seeing more of this ad during Sunday’s big game, so be sure to tune in (as if you hadn’t planned on it already).