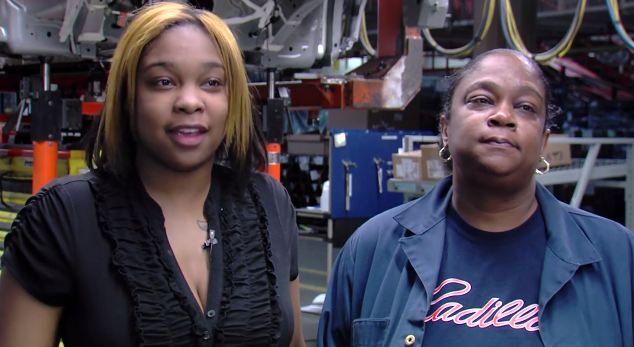 Monique Watson of Detroit will probably have a hard time coming up with a gift for Mother’s Day that will top what she already gives her mother every day by working side-by-side with her at General Motors’ Detroit-Hamtramck assembly plant. Monique and her mother, Evetta Osborne, are the two women responsible for installing the lithium-ion battery pack on nearly all Chevy Volts, Opel Amperas, Holden Volts, and Cadillac ELRs since they entered production, aside from any missed on occasional sick days or vacation days.

All told, the mother-daughter Detroit-Hamtramck duo have installed the batteries of more than 80,000 electric vehicles—together.

“We’re a good team and our relationship is secondary when it comes to performing our jobs – but it’s great to work alongside my daughter,” said Evetta, who has four other children as well.

“We’ve been doing it long enough together that we anticipate each other’s moves,” explained Monique, who is a mother herself. “There’s a lot of non-verbal communication that we share when we’re working, but it’s also great to know my mother is there to talk with and share things with every day. The arrangement has absolutely improved our relationship.”

Each battery pack weighs more than 400 pounds, so GM uses an automatic guided vehicle (a robotic cart) to deliver the batteries just as the vehicle body glides over top it. The cart lifts the battery pack, and Evetta and Monique must then guide the pack into the chassis and secure it with 24 fasteners. GM reported that the mother-daughter team has the choreography down to a science. 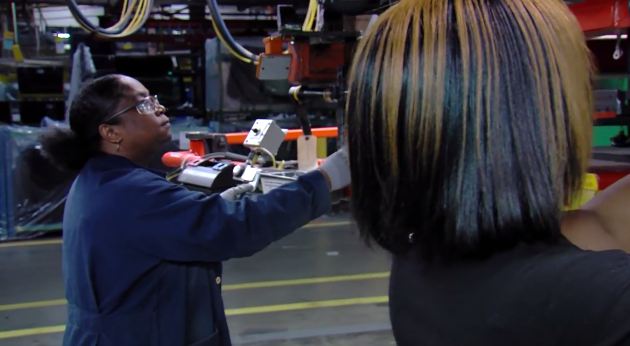 Evetta and Monique guide the battery pack into the chassis and fasten it in place.

Evetta has worked at Detroit-Hamtramck since 1999 and encouraged her daughter to join the team in 2006. In 2009, they trained to work on the Volt and were subsequently assigned to battery installation.

“I believed D-Ham would be a good place for Monique because the schedule allows you to balance work and family life,” Evetta commented. “It’s been a good experience for both of us.”

Monique added, “From an early age, we knew what it meant to give yourself 100 percent to your job. And while I know I’m doing a good job for our customers, I also know that my mom is right there, looking over my shoulder. Talk about expectations!”

Monique also explained that even her son wants to work there when he is old enough. That, or design cars. Sounds like General Motors is in that family’s blood!

General Motors recently invested $449 million in the Detroit-Hamtramck plant for production of the next-generation Volt.

See the mother-daughter Detroit-Hamtramck team in action below: