Even when things get messy, there's no such thing as a bad slide job 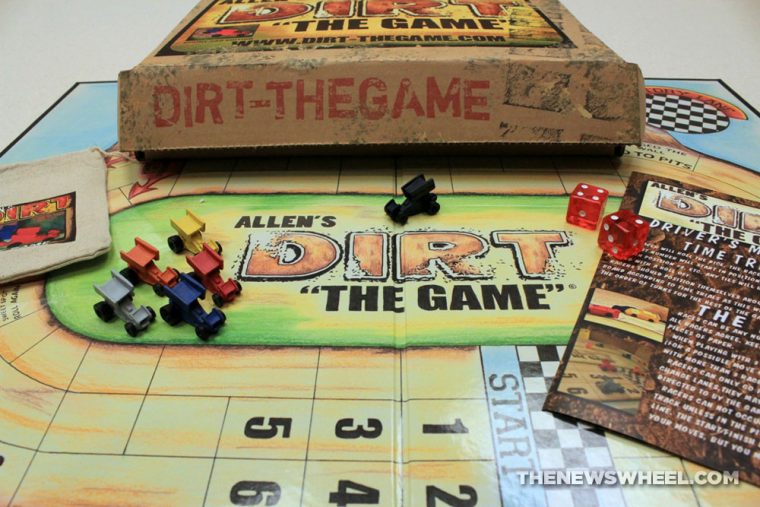 In the world of motorsports, there’s nothing as wild and rowdy as a sprint car race on a dirt track. Vehicles and drivers are pushed to the limit as they trade paint and claw their way across the finish line. It’s quite different from the prim and proper international racing that’s more about precision than aggression.

That’s exactly why dirt track racing would make a great board game; who wouldn’t want to throw down with their friends in a muddy motorsport match-up?

Allen’s Dirt-The Game is a self-published board game from Eric Allen, member of a legendary family of go-kart and sprint car drivers. Using his own experiences and those of his family, Allen captures the mayhem of dirt track racing in a simple but competitive board game. 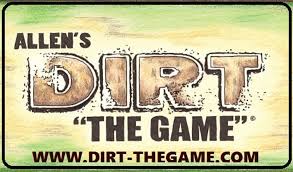 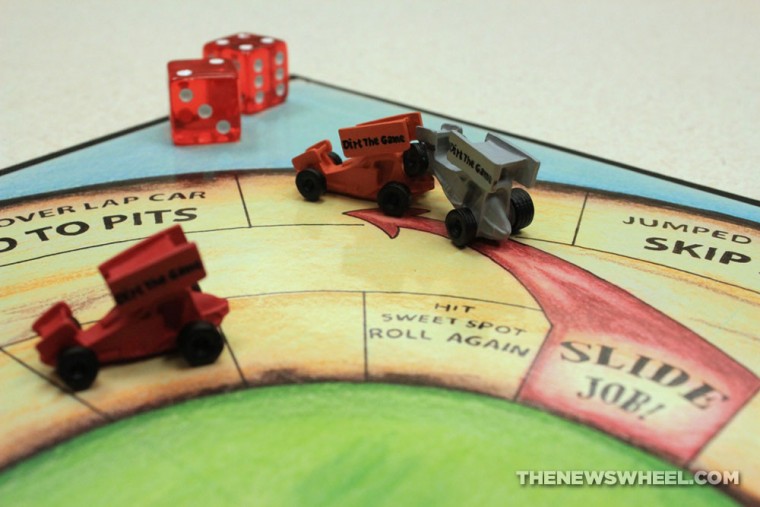 The goal of Dirt-The Game, like any tabletop racing competition, is to cross the finish line first.

After players choose their colored vehicle pawn and decide on a number of laps, they roll for position behind the starting line. The race begins and players take turns, based on position order, rolling the die to move around the track. Along the sides of the track, players must choose between high and low grooves (different paths) of varying length and risk. Different spaces direct the player to roll again, lose a turn, etc.

The most engaging aspect of the game is “making contact.” When you land on the same space as another player, you each roll the dice to see who’s knocked into the Pits and who winds up with control of the space on the track. It gives you incentive to crash into other players all the time–even if you want to advance halfway across the board by being sent to the Pits. And if you’re playing with all six players, a lot of people are going to wind up in the Pits. 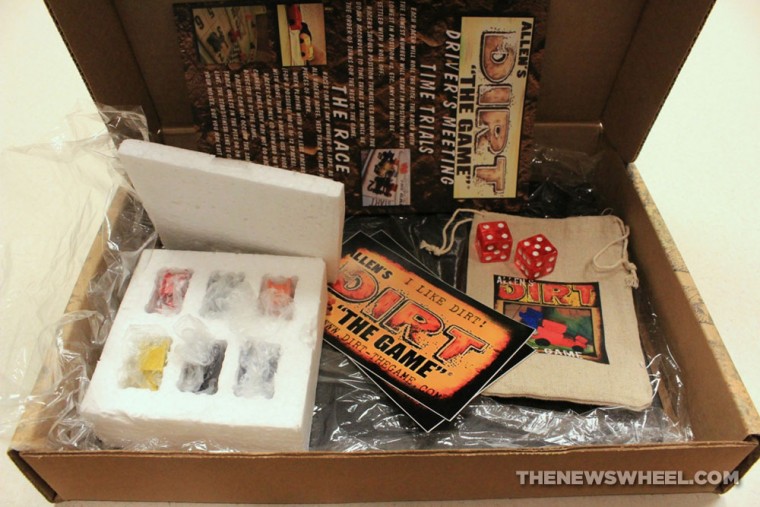 Dirt- The Game comes in a brown cardboard box splattered with mud-imitative paint and tire tracks. This type of box is uncommon for a board game but solidly secures its contents. Inside, the car tokens are wrapped in plastic and nestled in a Styrofoam block for protection. The dice are held in the canvas pouch, so overall the game should be in fine condition when you receive it. The board is even wrapped in plastic.

The glossy playing board unfolds, made of high-durability cardboard, and features a hand-drawn aesthetic. The car tokens are sturdy and amazingly detailed (easily the most attractive component of the game). The dice are a bit large but, like the rest of the game’s components, should hold up for a long time and many uses. As long as the box doesn’t get dented, torn, or scratched, the set is a solid investment for a very affordable price.

The playing tokens, each shaped in great detail like a type of racing car, are impressively constructed and easily the highlight of the game’s components. You can probably even customize them by painting them yourself. The styles of car tokens vary based on the edition you purchase. They’re available in sprint cars, late model stock cars, dirt modifieds, and go-karts. If you want more than one set, you can buy them separately without having to buy a whole new game edition.

Review of HABA’s Monza: Here’s a great Formula 1 racing game to play with your whole family 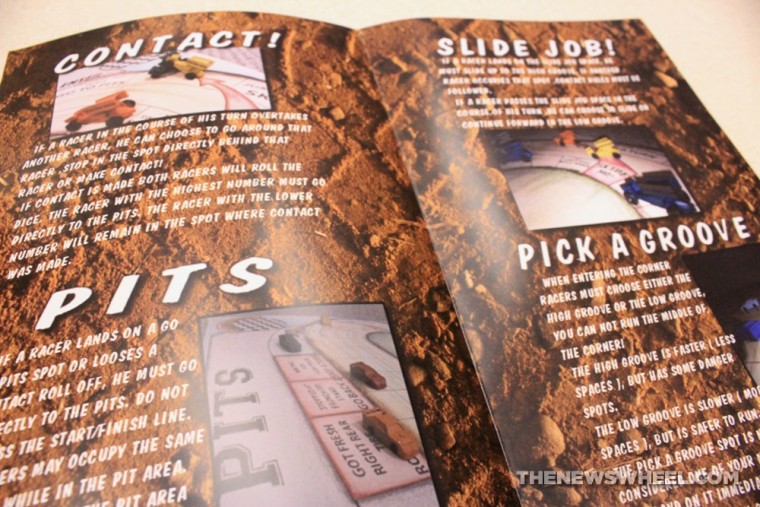 The three-page instruction pamphlet for Dirt- The Game is short and to-the-point, much like the game. It’s meant to be picked up quickly with little prep work. Game play is simple and can be picked up on quickly, both by reading the manual and being taught by someone else. The pictures accompanying the text are more for visual appeal than clarifying.

We did notice some minor typographical and printing errors in the pamphlet, which could use some updating, and there were aspects of the game that weren’t explained in enough detail (what does it actually mean to “go around that racer,” which space does the “groove” arrow land on, etc).

So, the game was initially slowed by discussion and votes on how to interpret the rules/board. If you play the game enough though, you’ll develop your own ongoing house rules to follow. 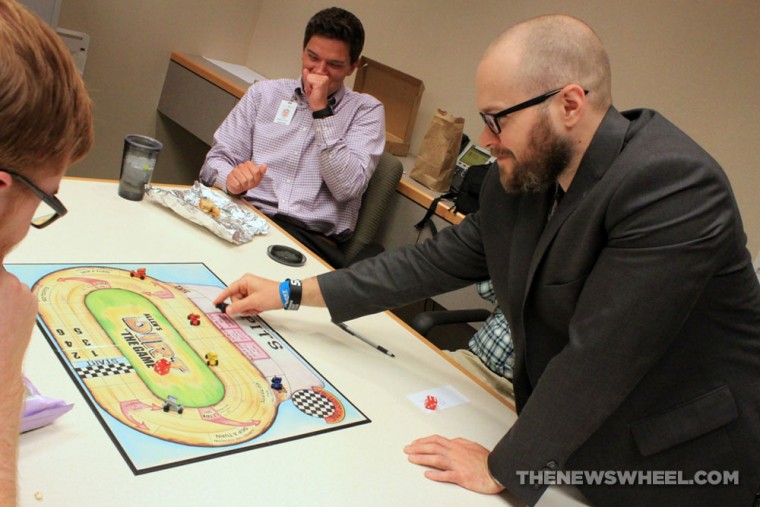 The game designer recommended to play Dirt- The Game with a lot of people, so we gathered our entire editing staff to play together. With two games going on at once, each with the 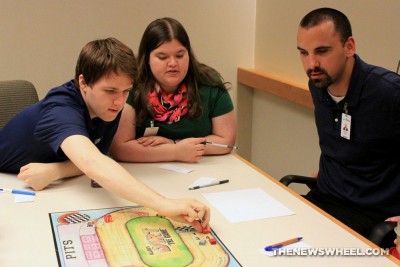 maximum number of players, we have to agree with Allen–the game is best with more players. It results in lots of contact and a lot of being sent to the Pits, making it anyone’s game even if you’re far behind the pack.

For as many auto racing board games there are on the market, few involve direct interaction between players on the board. Most games relegate car tokens on the board to blocking each other’s paths, but not directly influencing. The most appealing and innovative aspect of Dirt is making contact with other cars and sending them off the track to pit row. It’s chaotic, but it’s a blast. People who like order, strategy, and passive games may be frustrated, but even those who were frustrated were laughing, smiling, and wanted to play rematches. 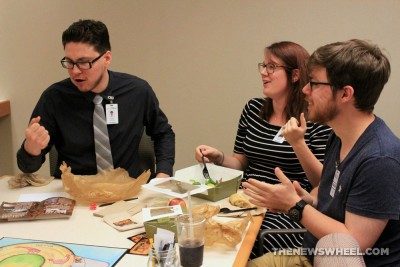 The ability to crash against other players is what sets it apart from most passive racing games; it feeds into a direct competitiveness that many other racing games don’t. It’s also an interesting dynamic that it might be in your advantage at certain times to be sent to the Pits because it will advance your position along the board.

The bottom line is that Dirt- The Game is a simple, low-strategy, but competitive racing game that captures the messy chaos and excitement of dirt track racing. It’s easy to learn and fun with a large group of people, plus it plays much faster than most slow-paced board games. Replay value will depend heavily on the people you decide to play with, how much strategy you prefer in your games over chance, and how competitive you are. We recommend giving it a shot!

Dirt The Game is available through the publisher’s website and Speed Sport Store.