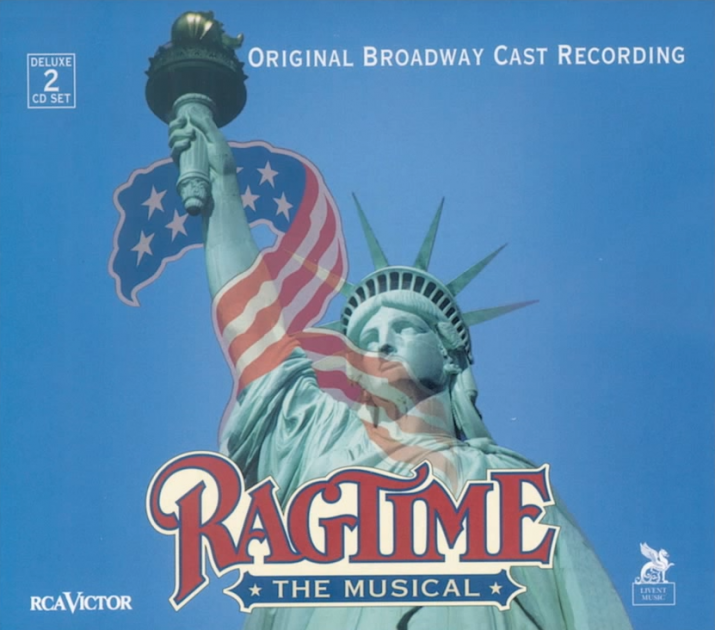 Musicars is zooming down history lane. Goodbye, Bonnie and Clyde and the Great Depression. Hello, turn of the century! The early 20th century was a time filled with change that marked an era of fame and success and poverty and racism. Step on the gas and get your syncopation on as we tap our toes and drive into a new era. It’s their time. It’s our time. It’s Ragtime.

Mobility on a Budget: Bargain vehicles under $15,000 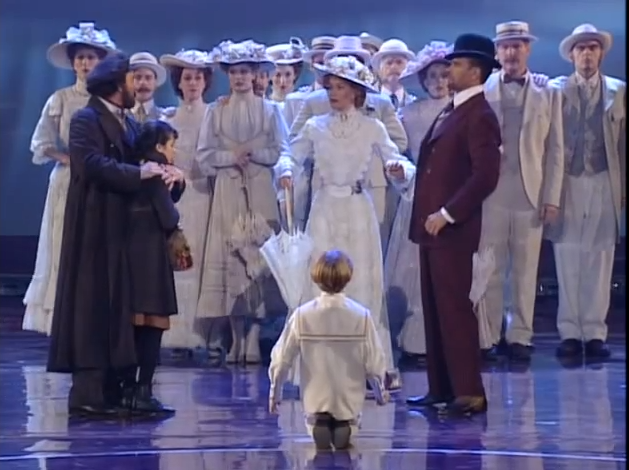 Based on the 1975 novel by E. L. Doctorow, Ragtime was adapted into a musical in 1996 in Toronto and made its Broadway premiere in 1998, closing in 2000 after 834 performances. With 13 Tony Award nominations, it led the 1998 Tony Awards, but it lost Best Musical to The Lion King. The Broadway revival in 2009 also opened to critical acclaim but closed after only 65 performances.

Ragtime is an American celebration. Through a combination of historical and fictional characters, Doctorow weaves together stories of three distinct groups into one narrative that is American history. In the early 1900s, African Americans, upper-class suburbanites, and Eastern European immigrants all come together as their lives cross paths in unexpected ways that is only possible in the great United States of America. Centered around Coalhouse Walker Jr., Mother, and Tateh as the main representations of each group respectively, the separate worlds of these groups blur together as they all try to overcome racism, sexism, xenophobia, and injustice all around in order to find success in the land of opportunity. 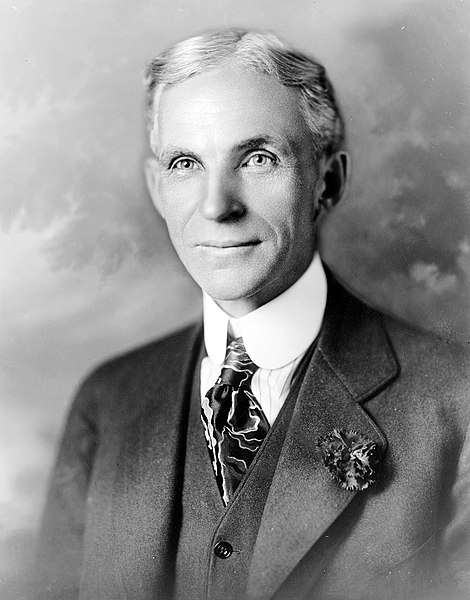 Everyone knows about Henry Ford, the Model T, and the assembly line — and for good reason too. The inventor created a turning point in American history, and he changed the lives of many people, including men such as ragtime pianist Coalhouse Walker Jr.

Determined to win back the affection of his love, Sarah, Coalhouse visits Henry Ford in his factory for a brand new Model T. There, Ford sings about his latest creation of mass production in a humble number called “Henry Ford.”

With “every worker a cog in motion,” Ford claims that “even people who ain’t too clever can learn to tighten a nut forever.” With interchangeable parts and interchangeable workers, the consumer industry was revolutionized. Through this modernization of technology, people can create cars faster, buy cars cheaper, and use brains lesser.

Ford’s idea for the assembly line was inspired by a slaughterhouse, appropriately reflecting some fears at the time about the end of skilled labor. Nonetheless, the assembly line is also a force for equality, and Coalhouse is able to afford a snazzy new car, which is not quite the blessing he hoped for. 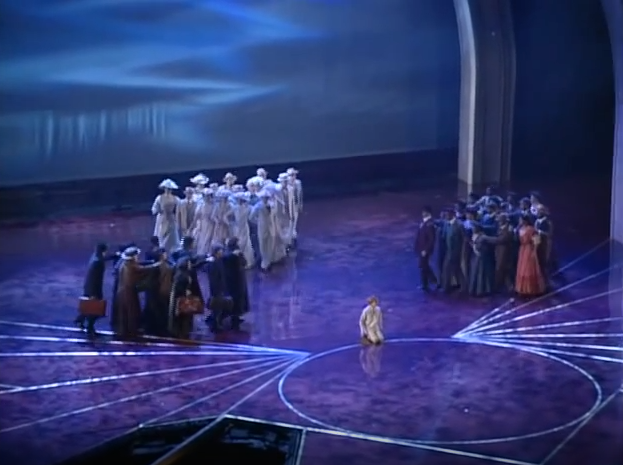 Tension among the three groups
: BroadwayJLM

“The Trashing of the Car”

After Coalhouse and Sarah enjoy a nice picnic together, they drive back to town in his sweet new ride, only to come across Will Conklin and his volunteer fire squad of racists, who rain on their parade by demanding they pay a special toll in order to pass through.

Coalhouse’s possession of a Model T — during a time where African Americans, though free, were not yet viewed as equal — challenges the expectations of the whites around him. The bigoted firemen reject his social and economic status, and they attempt to restore the status quo that they perceived Coalhouse to threaten.

In “The Trashing of the Car”, we hear Booker T. Washington advocating for patience, self-control, resistance, and strength in the black community as an act of injustice occurs. The sound of shattering windows is only a little glimpse into the damage on the car — in addition to broken windows, the Model T was splattered with mud and torn apart, its tires were slashed, and a “mound of fresh human excrement” was emptied on the seat before the men pushed the car into a pond. How rude.

When the firemen immaturely vandalize his car, not only did they destroy a prized possession, but they also directly attacked Coalhouse’s honor and pride. Because Coalhouse considered the Model T as an extension of his worth, he puts his life on hold — namely, his marriage to Sarah — until his car (and dignity) is restored.

Though the invention of the assembly line meant the Model T was affordable even for the average Joe, cars were still a status symbol dissonant with society’s views of race at the time. And with the actions of Will Conklin and his gang of white racists, the Model T now becomes a driving plot for revenge and justice. 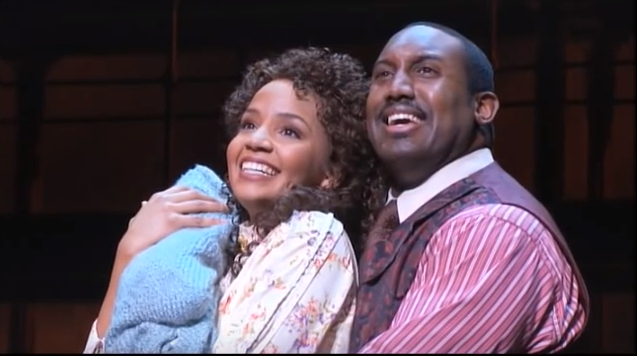 Broadway revival of Wheels of a Dream
: RagtimeBroadway

“Wheels of a Dream”

As things take a turn for the worse from that point on, let’s end on a happier, more hopeful note and rewind to a couple scenes before disillusionment hits Coalhouse. “Wheels of a Dream” is all about the future Coalhouse and Sarah see for their baby boy, and it aptly uses a car metaphor as “the wheels are turning for [them].”

Inspired by Booker T. Washington and the promise of a just and equal nation, Coalhouse and Sarah sing about how their child will “ride on the wheels of a dream.” Though uncertain, they are nevertheless optimistic of the future ahead. As Coalhouse sings that for his son, “beyond that road / beyond this lifetime / that car full of hope will always gleam / with the promise of happiness / and the freedom he’ll live to know,” that line applies beyond his family. Ultimately, there is reason for hope for all minorities.

Cars represent the American Dream and opportunities, and the Model T specifically symbolizes America’s forward progress. It is only fitting, then, that the destruction of the Model T results in the death of Sarah, Coalhouse, and his vigilante campaign.

However, life goes on, and when Mother and Tateh marry and adopt Coalhouse and Sarah’s child as their own, this united, blended family of different races and classes represents an undying hope as America continues to assimilate through its times and changes. 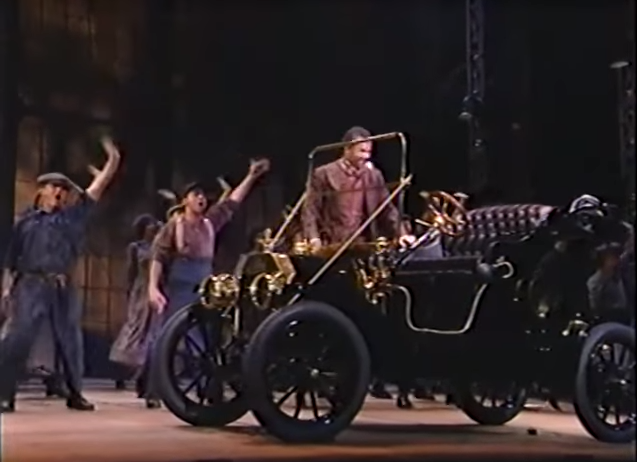 Ragtime revolves around the Model T, precisely because of everything it stood for — mobility, freedom, independence, and equality. Therefore, many grand productions of the musical were determined to feature a real Model T. The first U.S. production of Ragtime premiered in Shubert Theatre, Los Angeles in 1997. The show cost $10 million, and that was in part due to its numerous costumes, settings, orchestra members, and historically accurate props, which included a life-size replica of a 1906 Model T. When the musical reached Broadway, the original production featured a vintage circa 1912 Ford Model T convertible. The specially-built engine-less prop was put up for auction on eBay in 2002.

With the dawn of the 20th century came immigrants, change, and of course, the Model T. Without the invention of the assembly line and an affordable car, the course of this story, and America’s story, would not be the same. So thank you, Henry Ford, for bringing a new syncopation into our lives and providing us with the mobility and freedom we so desperately crave.

Ragtime is a musical about changing times that applied to the 20th century and still applies today in the 21st century. Ragtime is the sound of America — it is the music of who we were and the anthem of who we are. As the automobile continues to evolve from the Model T, this great country of America continues to evolve with it. As the music of ragtime lives on, we, as individuals and as a nation, must continue to look forward by embracing the passage of time and accept change, and everything it entails, as we keep rewriting ourselves and our story — hopefully, for the better.

Join us next time as we continue this road trip through the land of musicals.

Evolution Continues: What we know about the 2020 Ford Bronco