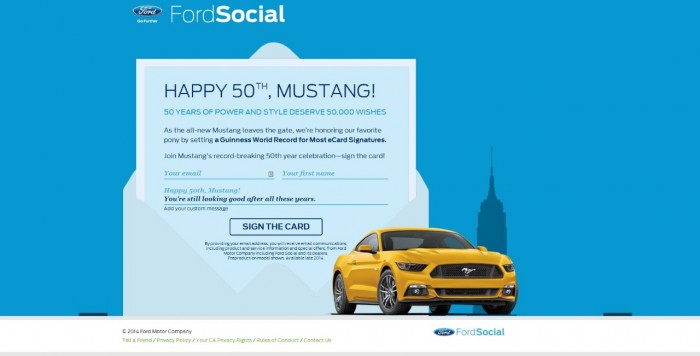 The Mustang birthday card, in all its glory

Leading up to the Mustang’s 50th birthday yesterday, fans around the globe were given the opportunity to sign an online Mustang birthday car to share their love and fond memories of the beloved pony car. To obtain a Guinness World Records® title, 50,000 people needed to sign the e-card—and it would have been pretty embarrassing if the American icon (with nearly 6.5 million Facebook fans and 177,000 Twitter followers) could not manage.

Luckily for the Mustang, 55,720 loyal fans signed its card, earning it and its many signers (this guy included) a place in the record books. The Mustang birthday card became available for signing on April 9, with inhabitants of more than 160 countries accessing Ford’ press site to sign the card. April 10 saw peak activity; 10,534 people sent their best wishes on that day.

“Mustang is an inspirational car, and it is no surprise its fans worldwide have been inspired to help make history on this very special occasion,” said Steve Ling, car marketing manager at Ford. “After an exciting week of celebrations globally, the Guinness World Records title is an extraordinary exclamation point on Mustang’s birthday today.”

Congratulations, Mustang. I was glad to help you break that record. I’ll accept a 2015 Mustang Convertible as payment—I think that should about cover it.