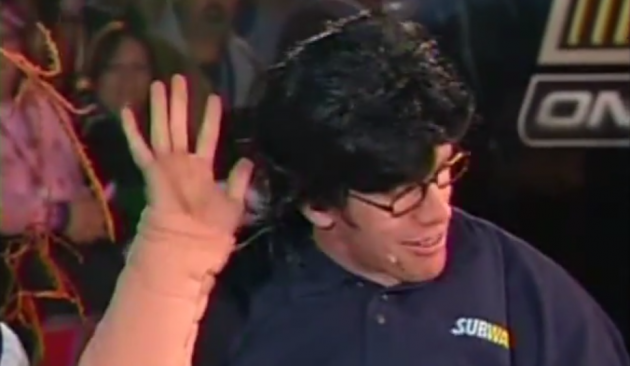 It’s been a tough week for America’s most beloved professional eaters.

Are there any heroes left in the world?

Although Fogle has not been arrested and is reportedly cooperating with the investigation, computers, media storage devices, DVDs, and documents were all confiscated from the house he shares with his wife and two children. Many are speculating that the raid is connected to the recent child pornography charges filed against the executive director of Fogle’s Jared Foundation, which aims to combat childhood obesity.

As a result of the scandal, Subway tossed Fogle quicker than a Clayton Kershaw fastball with extra mustard on it. But Subway-sponsored NASCAR driver Carl Edwards didn’t relish the opportunity to dive footlong headlong into the rampant conjecture, telling the press that the speculation surrounding Fogle is half-baked, at best.

“There’s no reason to even speculate” about the situation, Edwards told reporters at Kentucky Speedway. “Out of respect for Jared and the judicial process, I think it’s really important to wait until there’s some facts.”

Edwards has appeared alongside Fogle in Subway commercials in the past, including a 2010 marketing campaign in which he trained for the New York Marathon with the help of Edwards, NBA star Blake Griffin, and Olympic swimmer Michael Phelps. And in 2009, Carl Edwards dressed up as a pre-weight loss Jared Fogle for a special Halloween-edition of Trackside Live at Talladega (the real Jared, in turn, dressed up as Carl Edwards):

“I’m Carl Edwards,” Jared said while wearing a muscle suit. “I don’t win many races, but I’m in the gym all the time.”

“And I make lots of money for doing nothing but eating Subway,” Edwards (as Jared) shot back playfully. “America is unbelievable!”

After some good-natured ribbing, Edwards offered his sincere admiration for Jared, saying, “You’re a real inspiration to people. I started eating at Subway [after] I saw what you did… and you said you’ve spoken to three- or four-hundred thousand kids across the country about being fit, and I think it’s cool what you do, man.”

Since 2002, Fogle has also acted as the grand marshal at several NASCAR races, though from now on he’ll probably be as welcome at the track as a Confederate flag.

But, as Edwards says, we still don’t know all of the facts. If Jared is found guilty of wrongdoing, though, it will be a sad day for our nation.

If you can’t trust a guy who says eating hoagies from a fast food joint will help you lose weight, who can you trust?