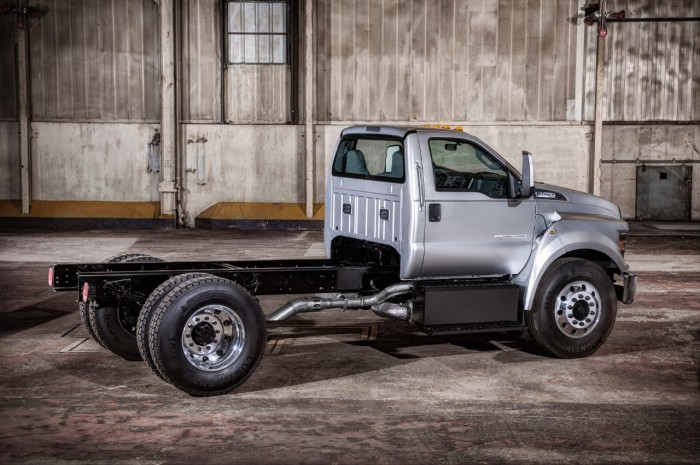 This week, Ford announced the all-new F-650 and F-750 medium-duty commercial trucks at the NTEA Work Truck Show in Indianapolis, Indiana. Available in three cab styles—regular, SuperCab, and CrewCab—the F-650 and F-750 bolster commercial vehicle lineup considerably when they go on sale in the spring of 2015.

“Every day, we’re thinking of new ways to better serve our hard-working customers,” said John Ruppert, general manager, Ford Commercial Vehicle Sales & Marketing, in a press release. “The same Ford engineers who developed the best-selling F-Series have designed this all-new medium-duty lineup that can meet the demands of our toughest customers with trucks that are cost-effective, ready for work, and, most importantly, can help keep them going on the job.”

The all-new F-650 and F-750 trucks will be available with the 6.7-liter Power Stroke V8 diesel engine, which will be mated to a six-speed 6R140 automatic transmission. Ford’s medium-duty commercial trucks are the only available on the market to spot in-house-built diesel engines and transmissions; this allows the engineers at Ford to better optimize the trucks’ performance and the drivers to get the most out of their day’s work.

The all-new F-650 and F-750 will also offer the option of a 6.8-liter V10 with a six-speed automatic transmission. The V10 can be fueled by regular gasoline, compressed natural gas, or liquid propane, giving drivers a number of options that allow them to cater their truck to fit their needs.

The exteriors of the F-650/F-750 also get an overhaul in order to be more evocative of the new F-150 truck. The grille features a pair of vertical chrome bars framing a mesh grille, more pronounced fenders, and sharper headlights.

Production of the all-new F-650 and F-750 will get underway at the Avalon Lake, Ohio assembly in the spring of next year.

Are you in need of a commercial truck? Does the F-650 or F-750 catch your eye? Leave us a comment and let us know what you like or don’t!