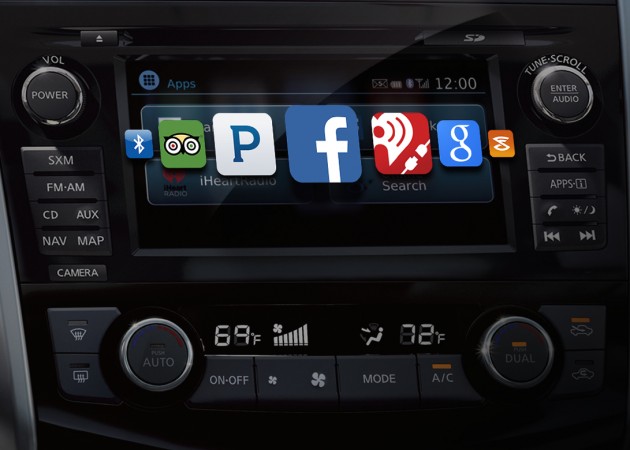 The NissanConnect system won the Telematics Detroit Industry Newcomer award back in June and was recognized for allowing drivers to stay connected to the online world without being too obtrusive to the #1 priority when driving a car, which is actually driving the car.

So it’s 2015 and everyone has bad-ass smartphones, but we somehow still don’t have autonomous cars yet. That creates a bit of an issue when you want to tweet but also need to actively pilot your 3,000 pound non-autonomous car. How will you tell your 42 followers about the guy that just brake checked you? #jerk

All jokes aside, the award-winning NissanConnect system aims to solve this problem by integrating hands-free technology and your favorite mobile apps directly into the car. The system currently offers Facebook, Google, and iHeartRadio and just got updated with Twitter and TripAdvisor. With the NissanConnect apps displayed on the center console screen, distractions are reduced, making the vehicle safer while still allowing the driver to stay connected to the world.

In the video below, a woman demonstrates the effectiveness of this technology by receiving a random call in her Nissan Rogue from a dude who wants to buy her dinner, which she answers using the steering wheel.

She accepts and uses the system to find the restaurant that is presumably in the town that she lives and/or works in, so maybe she’s just really bad with directions. She used the system earlier to check in to a different restaurant on Facebook, probably alerting her potential suitor of both her location and her fondness of restaurants, but that totally isn’t creepy.

The system is currently offered in the Rogue, Altima, Sentra, Frontier, Versa, and Juke. What apps would you like to see on NissanConnect in the future?