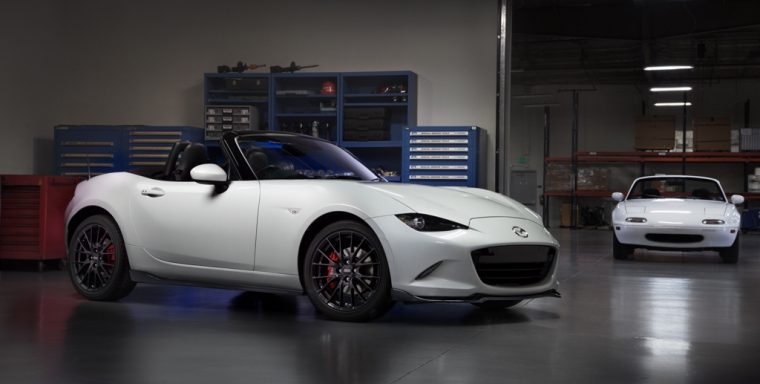 When it came time to create the new generation of the Mazda MX-5 Miata, one of the biggest strategies was part of the brand’s SKYACTIV strategy: lose some weight. Through the use of aluminum and other pound-saving measures, the MX-5 was able to drop 148 pounds, leading to a curb weight of a little under 2,400 pounds.

So, obviously, the Miata is not what you would call a giant, heavy car. However, Mazda is still eying that scale wistfully. According to the MX-5’s program manager Nobuhiro Yamamoto, the automaker may turn to using carbon fiber to lighten the Miata. “[…] in the future lightweight materials will be very important and will be used in this car,” he told Autocar. “Now carbon fiber is very expensive, but we have in development affordable carbon fiber, so the MX-5 will be lighter in the future.”

Yamamoto also mentioned that they would probably not change the size of the Miata, otherwise. However, another change might be coming to the future of the Miata—a smaller, possibly three-cylinder, engine. “It’s a simple concept,” Yamamoto said. “The vehicle weight gets lower, there’s a smaller engine, smaller tire. It’s a lightweight sports car.”

Of course, this is all a great big speculative “if” in Mazda’s future, since the plan for lowering the Miata’s weight counts on the company developing a cheaper way to produce carbon fiber. Otherwise, the next Miata isn’t expected to appear until at least 2021, although others speculate that it may take up to two years more than that.