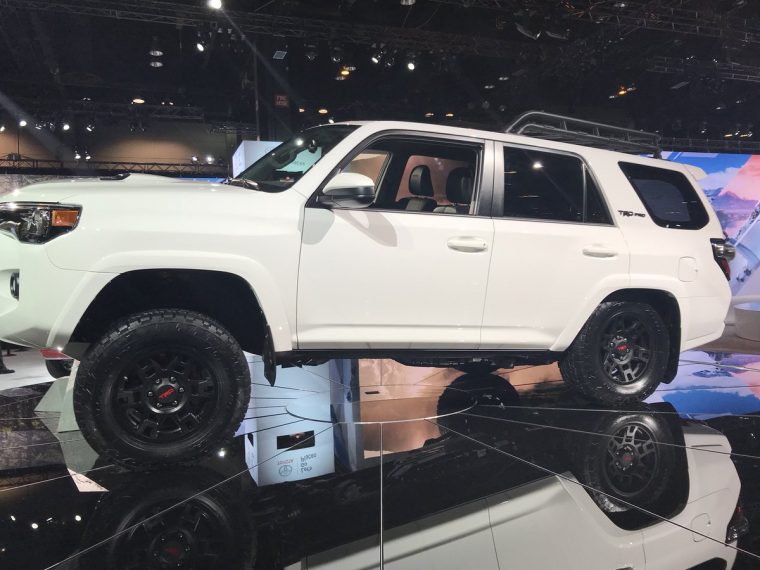 Toyota has unveiled the next generation TRD Pro Series, including the 4Runner SUV, Tacoma midsize pickup, and Tundra full-size pickup, at the 2018 Chicago Auto Show this morning.

Sales for these vehicles soared in January, and according to the automaker, about 40% of people buying them bought the off-road-ready TRD Pro models, which were originally unveiled in 2014. For the 2019 model year, they’re getting even better.

“The TRD Pro lineup was born from Toyota’s rich racing and off-road heritage,” the automaker says in its press release. “All TRD Pro vehicles offer unique styling, as well as highly capable, tried and tested performance off-road equipment, specifically tailored for when the pavement runs out.”

Every TRD Pro model will come equipped with rear 2.5-inch, aluminum-bodied Fox Internal Bypass shocks with a piggyback reservoir that will supposedly let you do what off-road trucks are supposed to do, but even better than traditional off-road suspension and while providing a more comfortable ride when driving on regular roads.

These are paired with specially-tuned TRD springs and a variety of other equipment to further enhance capability. The Tacoma TRD Pro gets a cat-back exhaust and an all-new Desert Air Intake that helps the engine avoid swallowing in dust. The Tundra TRD Pro gets new LED fog lights from Rigid Industries and 18-inch BBS forged-aluminum wheels. The 4Runner TRD Pro gets a unique roost shield and a new roof rack, plus Nitto Terra Grappler all-terrain performance tires.

The models will also be lavishly equipped and include a standard Entune Premium JBL Audio system and various eye-catching cabin appointments, all stamped with the TRD logo of course, as well as the latest Toyota Safety Sense suite of active safety tech.

The News Wheel is live tweeting, Instagramming, Facebooking, and more from the 2018 Chicago Auto Show. Follow The News Wheel on social media to stay up-to-date on all things CAS 2018 and perhaps catch a closer look at this new model