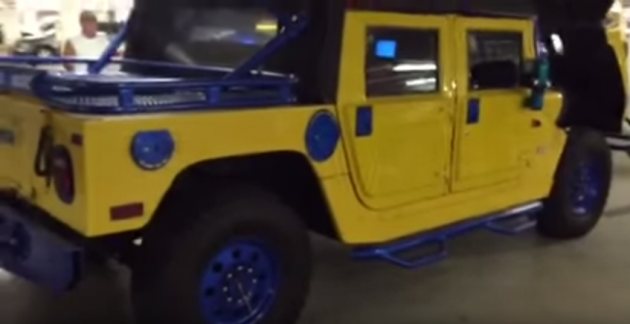 NFL quarterback Mike Vick made news this week for signing a one-year contract to play for the Pittsburgh Steelers and also created headlines recently for informing the public that a custom 2002 Hummer H1 put up for auction on eBay never belonged to him, contrary to what the vehicle’s owner was telling people on the online bidding site.

The yellow and blue Hummer was listed on August 20th and featured this all-capitalized note from the vehicle’s seller:

DROP DEAD GORGEOUS CUSTOM H1 PREVIOUSLY OWNED BY MICHAEL VIC. TOTALLY CUSTOM WITH NO EXPENSE SPARED. AMAZING CONDITION BECAUSE OF LOW MILEAGE AND GARAGED ALWAYS. LOOKS AMAZING AND ALL HEADS TURN TO SEE WHO THE FAMOUS PERSON IS BEHIND THE WHEEL. CUSTOM INTERIOR HAS STATE OF THE ART AUDIO AND VISUAL AS WELL AS CUSTOM LIGHTING. THERE ARE NO ISSUES AT ALL. PLEASE WATCH VIDEO:

Automotive Science: Want to know the secrets to how anti-lock brakes really work?

This 2002 Hummer H1 features a 6.5-liter turbocharged V8 engine and only had 47,573 miles on it. Due to GM’s financial crisis and bankruptcy announcement in 2009, the Hummer brand was shut down and the last Hummer ever was produced in 2010.

TMZ reached out to Vick’s representatives to verify the Hummer previously belonged to the NFL legend after it was first listed on eBay on August 20th, but Vick’s people said he had never owned a Hummer in his life and would never have driven a vehicle that looked like that one. The interior of the Hummer was highlighted with a blue suede interior and custom entertainment system.

The Hummer’s listing on eBay was ended and the online auction cancelled after Vick said the vehicle never belonged to him.

The seller left another all-capitalized message on eBay explaining that the dealer he bought the vehicle from had said the H1 previously belonged to Vick, but that dealership is closed now, so he will have to track down the salesman to get an explanation.

At least 25 bids were made on the custom Hummer before the auction was cancelled. The highest bid was $20,000.

Hot Technology: Why did GMC add Apple CarPlay and Android Auto to 2016 models?