NHTSA Will Require Mandatory Backup Cameras By May 2018

The NHTSA's ruling will require all vehicles manufactured on or after May 1, 2018 to have a rear visibility system standard. 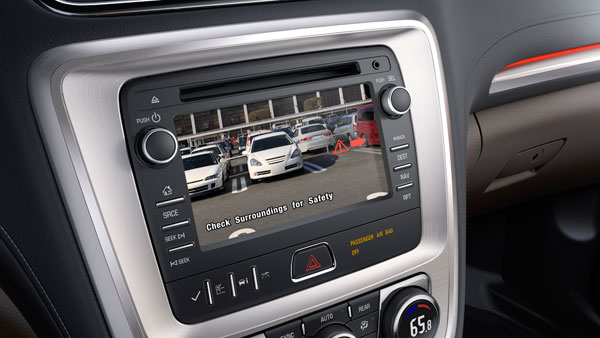 The rearview camera available in the 2014 GMC Acadia. The NHTSA ruled Monday that all vehicles must come standard with backup cameras by May 2018

It has been announced that the National Highway Traffic Safety Administration (NHTSA) will require all vehicles under 10,000 pounds manufactured on or after May 1, 2018 to utilize backup cameras. The ruling states that by that predetermined date, all vehicles must come standard with rear visibility technology in order to ensure that drivers have a clear view of the area behind the vehicle and in the hopes that it will reduce the number of deaths that occur annually in backup accidents.

The NHTSA has been mulling over mandatory backup cameras since consumer groups and families began rallying for the technology to become standardized. The charge is that vehicles lacking rear visibility systems are considerably more likely to be involved in a back-over accident. The NHTSA states that, on average, 210 people die annually as a result of backover accidents, and that 31 percent of those who are killed in these accidents are children aged 5 or younger.

“Safety is our highest priority, and we are committed to protecting the most vulnerable victims of backover accidents — our children and seniors,” said U.S. Transportation Secretary Anthony Foxx in a statement. “As a father, I can only imagine how heart wrenching these types of accidents can be for families, but we hope that today’s rule will serve as a significant step toward reducing these tragic accidents.”

NHTSA Acting Administrator David Friedman, who will be called before the House of Representatives Energy and Commerce Committee tomorrow, stated that mandatory backup cameras will save lives. It is assumed that once all on-road fleet vehicles are equipped with rear visibility systems, 58 to 69 lives will be saved annually.

What do you think: are mandatory backup cameras commensurate to greater safety and fewer accidental deaths?