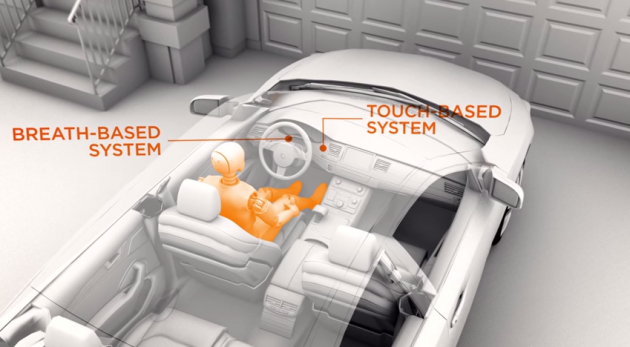 The National Highway Traffic Safety Administration has unveiled a new technology system that could help keep drunk drivers off the streets, which has been in development since 2008.

The tech is called the Driver Alcohol Detection System for Safety, or DADSS (neatly ignoring the easy, obvious codename). It is a noninvasive system aimed at detecting the driver’s blood alcohol content in less than one second, with two possible methods described.

The first, mounted on the steering wheel, samples the driver’s breath and uses a laser to estimate the driver’s BAC. The second, mounted inside the Start button, would use a similar system, but applied to the driver’s finger. In either case, if the system calculates that the driver’s BAC is above .08 (the legal limit in all 50 states), the car won’t move.

Other features of the system include an ability to program the system for underage drivers, to lower the .08 limit all the way to zero.

ABI Managin Driector Sarah Longwell said, “‘Voluntary’ passive alcohol sensors like DADSS will do nothing to keep these dangerous drivers off our roads. Instead, DADSS will simply stop many responsible social drinkers who have a glass of wine with dinner from starting their cars.”

However, the NHTSA is optimistic.

NHTSA Administrator Mark Rosekind said, “DADSS has enormous potential to prevent drunk driving in specific populations such as teen drivers and commercial fleets, and making it an option available to vehicle owners would provide a powerful new tool in the battle against drunk driving deaths.” He added that, in the future, people will think, “How did we ever drive without it?”

Automakers said that research on the project could take another five to eight years, but the technology could go up for sale at any time.