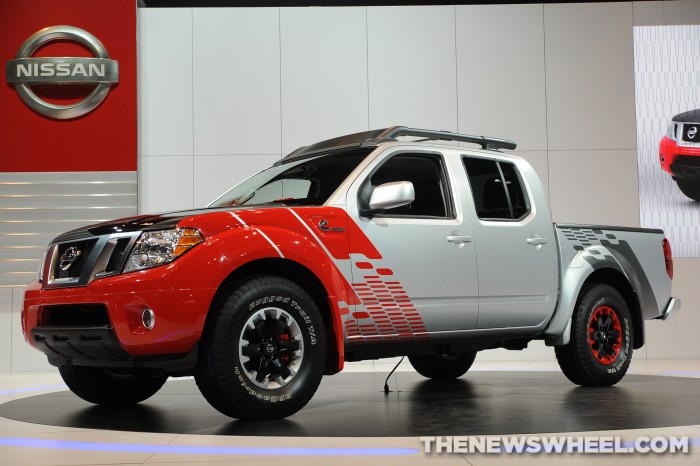 The midsize pickup segment is suddenly gaining a lot of traction with the reveal of the new Colorado and Canyon, as well as consumers’ needs for more fuel efficient trucks that are capable of doing the same amount of work as a full-size truck. The need for more cost effective vehicles has even led automakers to embrace the possibility of manufacturing trucks powered by diesel engines.

Nissan, who it seems has to frequently poke their head out if only to say “hey guys, we still make trucks over here, you know,” dropped a bombshell at the Chicago Auto Show this morning with the reveal of the Nissan Frontier Diesel Runner. 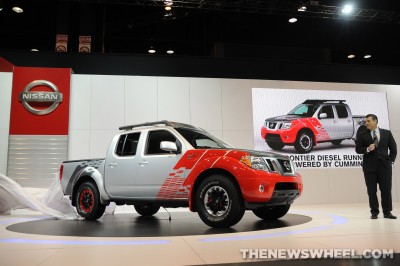 The Frontier Diesel Runner Concept is powered by a 2.8-liter Cummins turbo diesel engine that generates around 200 horsepower and in excess of 350 lb-ft of torque. The Diesel Runner is based upon the Desert Runner 4×2 model and, according to Nissan’s press release, is intended to gauge consumer reaction to a midsize pickup powered by a diesel engine.

When explaining the logic behind the Nissan Frontier Diesel Runner concept, Nissan Senior VP of Sales and Marketing, Parts and Service, U.S.A., offered a more simple explanation: “why the hell not?”

“Frontier continues to be a huge success story for us, with more than 60,000 units sold in 2013,” Diaz said. “Nissan has always valued the mid-size pickup segment, and with this technical study project, we are looking to explore what is possible for the next-generation Frontier. We are always looking for ways to engage our customers, innovate and take the segment in an evolutionary direction.”

The Nissan Frontier Diesel Runner certainly looks the part of something innovative in a custom paint scheme that combines three shades: “Arrest Me Red” (which is inspired by the color present in Cummins’ engines), “Matte Silver,” and carbon fiber accents.

It’s a sight to behold, and if the reaction of those in attendance is any indication, there’s a good possibility we might end up seeing something resembling the Nissan Frontier Diesel Runner in production sooner rather than later.

For more on the Diesel Runner Concept, check out our Nissan Diesel Runner photo gallery and Nissan’s press release. And for more 2014 CAS coverage, stay tuned to The News Wheel throughout the week!