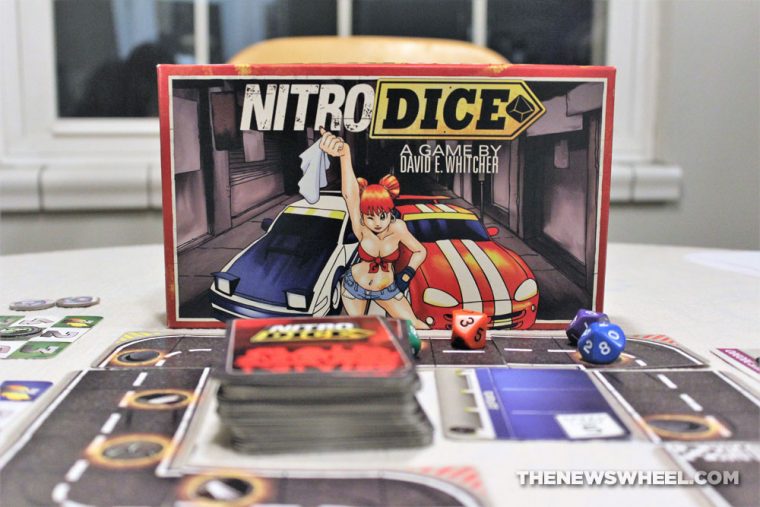 Not all motorsports are posh, high-class endeavors like rich sponsors would want you to believe. For people who race on the streets with their own cars, it’s rough, gritty, and edgy. Nitro Dice, a game by David E. Whitcher, focuses on that underground world of street racing, bringing it to life through cards and dice.

I got my hands on a copy of Turbo Dice recently, which has been out of print for multiple years, and was curious to see what this racing card game has to offer. After giving it a couple play-throughs, I was pleasantly impressed.

Car Care Tips from the Pros: Advice for keeping your car running for years to come 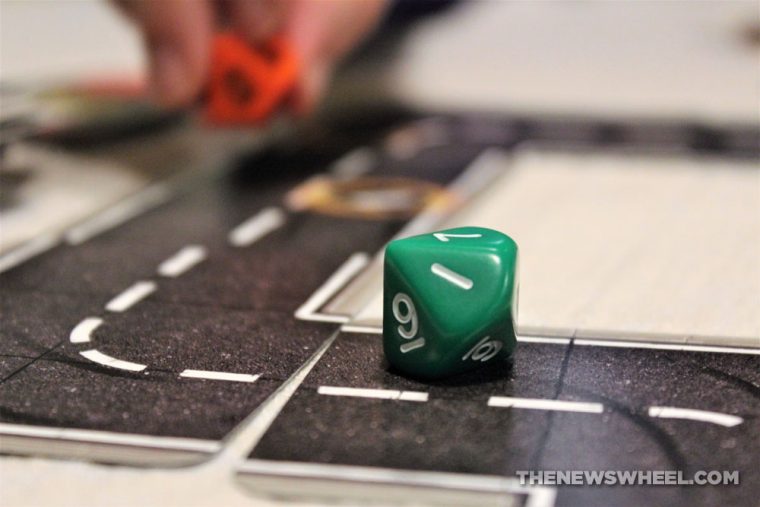 To play Nitro Dice, you need to start by assembling a two-lane track using a handful of cards in your preferred arrangement. Each player receives a handful of track cards, a colored die, nitro tokens, and a car condition guide. All players roll to determine starting position, then place their 10-sided die behind the starting line. 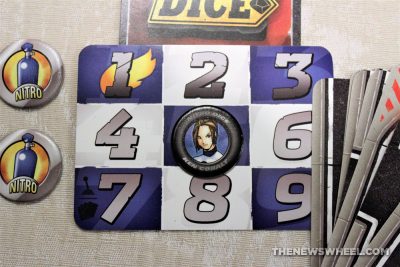 Rounds consist of two phases. First, players determine vehicle speed (tracked by rotating the die until the appropriate number is face-up) by decreasing or increasing the speed by one or two. Second, players move their die (functioning as pawns representing the vehicles) down the street the appropriate number of spaces, abiding by movement rules. They must discard track cards from their hand to traverse new track cards, change lanes, drift, or brake, and they can discard their nitro tokens for quick boosts. They also have the option of playing track cards from their hand onto the track, modifying it to add or remove hazards along the route.

If players sustain damage from collisions or the inability to pay card costs for movement, their vehicle condition level lowers, which in turn affects their hand limit and speed limit.

The person who’s “car” crosses the finish line furthest in the final round (triggered by the first person to cross it) wins the game. 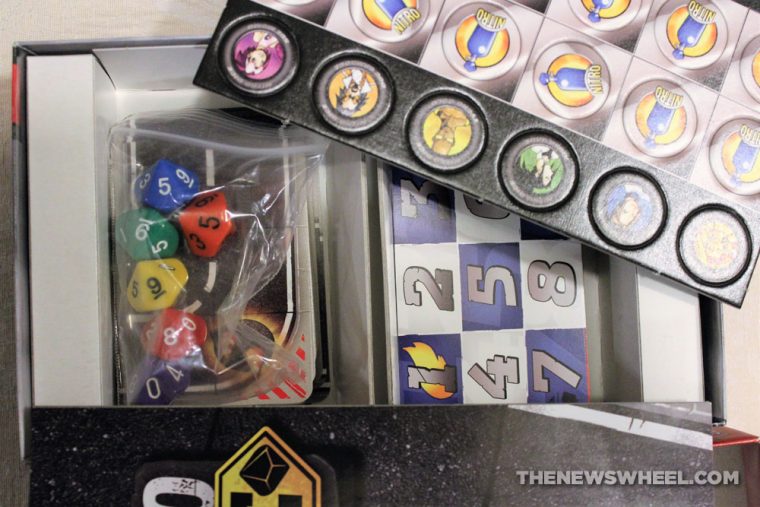 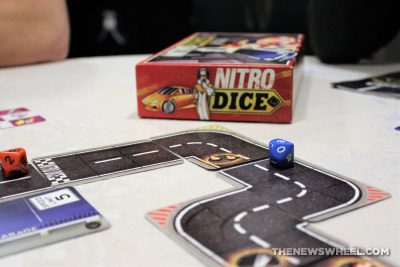 Let’s address the first thing that people notice about Nitro Dice: the artwork. While it’s certainly not bad—it’s stylish and bears a Japanese anime form—it might be a bit racy for children (or conservative old folks, for that matter). It’s admirable that half the driver characters are women—a rarity in racing games—but unclear why all of them need to be dressed provocatively. Teenage boys will certainly find this more appealing than your average motorsports game, so at least that’s a selling point.

As far as the components themselves, you receive quite a lot for the price and the compact size of the box. Once you unwrap it all, the game can take up a decent amount of table space. The cards are colorful, sturdy, and visually uncluttered, thus serving well as the track. They and the dice store well in the box thanks to durable dividers. The box design is vibrant and active, promoting the street racing fashion and high-speed appeal.

The one downfall of using cards as the track is that they tend to slide around on the table, so you will have to fix their alignment after almost every turn.

Revisiting History: Do you know how these automotive milestones were achieved? 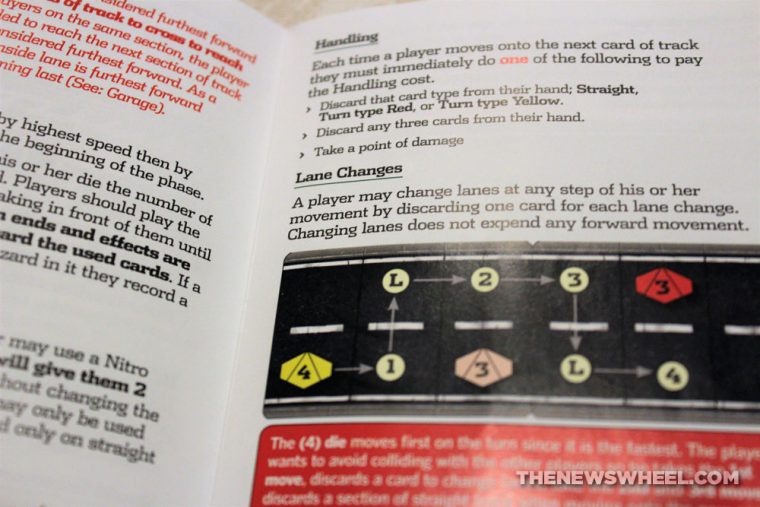 Nitro Dice was a tricky game to learn and teach to others, primarily due to the intricacies and particulars of movement rules. Advancing, changing lanes, braking, drifting, drafting, and colliding all had their own guidelines, which were important to comprehend before starting the game. Luckily, the instructions booklet was filled with detailed pictorial examples, and was organized for easy reference (which we needed to do multiple times in the first lap). It’s a bit over-complicated for the gameplay weight it’s aiming for; we didn’t even encounter every scenario that the rulebook prepared us for. 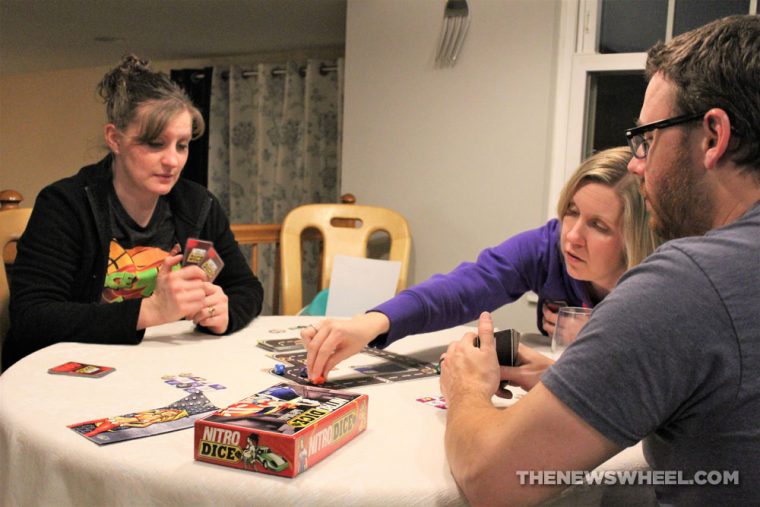 As a racing game, Nitro Dice has some elements I appreciate. Player ranks change drastically throughout the game (in one of our games, the person in last ended up winning) without there being much distance between the first and last players. This tight formation kept players involved and competitive throughout. The gradual effects of damage offered the perfect level of influence on the game without grinding it to a halt. This is also one of the few racing games that embrace drifting and make it a legitimately useful move to make on the track. 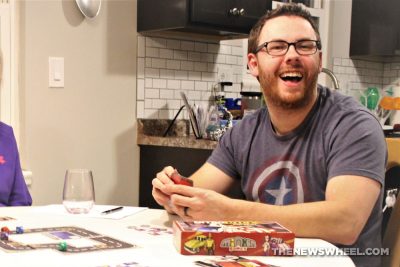 The biggest selling point of Nitro Dice is the interplay among vehicle condition, speed, and hand size. The idea of possessing cards that can manipulate the course and then tracking the effects of damage using those cards is honestly brilliant. These often disparate aspects of the game are seamlessly integrated into a cohesive experience that feels unique to tabletop racing.

It’s important to begin the game knowing that the first handful of rounds will be slow as the players gradually increase their speed up from 1. Eventually, turns will be quick and movement will be swift as players dart across the track, but the opening rounds move slowly, focusing on learning rules of movement more than actually moving. The experience of the game also can vary greatly depending on the track shape and the number of players participating (I wouldn’t play with fewer than four).

The core aspects of Nitro Dice are admirably innovative, but the complexities of vehicle movement make it feel slower than it should be. We still had fun playing it, and if you’re looking for a street-racing game that balances risk vs. reward, this is a solid choice—especially if you like the artwork.

Nitro Dice is out of print but can be found on Amazon, Ebay,