No, There Probably Won’t be a 2016 Chevy Camaro in Batman v Superman 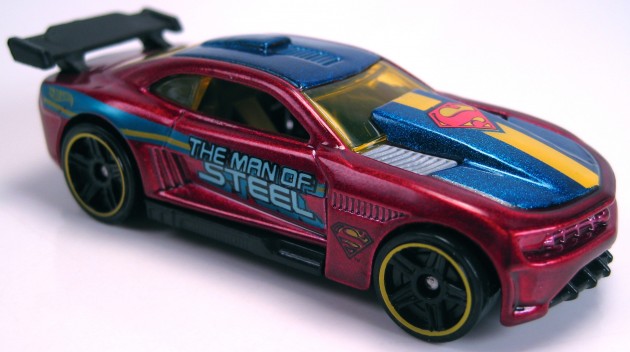 If the Camaro Krypton turns out to be a life-size version of this toy car, we won’t even be mad

Last month, it was reported that GM had registered a trademark for the terms “Camaro Krypton” and “Krypton.” There was speculation by many (including us) that it could have something to do with the upcoming Batman v Superman: Dawn of Justice film—perhaps the Dark Knight defeats the Man of Steel by running him over with a custom 2016 Chevy Camaro that’s got a kryptonite grille, or something.

Oppenheiser guessed that the trademark applications were probably registered for projects that GM is considering, but may or may not actually pursue. And while some scenes in Dawn of Justice were indeed filmed in Michigan, the only Motor City muscle we know for sure will appear in the film is in the form of the Batmobile’s General Motors LS crate engine V8.

“Sometimes when we come up with a new color in our studios, they just apply (for a trademark) in case we ever use it,” said Oppenheiser. “We never said we’re going to do anything with that color.”

So it sounds like there is a possibility that a bright green color option for the new sixth-gen Camaro may be in the works, but it almost definitely won’t be appearing in a Justice League movie anytime soon.

So apparently the Joker is the only DC character that’s allowed to drive a garish sports car.