Remember how I playfully suggested that right-wing pundits might just freak out about the prospect of the President of the United States bowing to a robot manufactured by a Japanese automaker? Well, I was mostly right.

Critics saying President Obama bowing to a Chinese robot makes us look weak – Do you agree with them or is this really no big deal?

Turns out I was mostly spot-on about pundits, like the geniuses over at Drudge and Brietbart, freaking right out about nothing. What I failed to grasp, however, was that some of these folks aren’t intelligent enough to differentiate Japan from China. Oh, you! 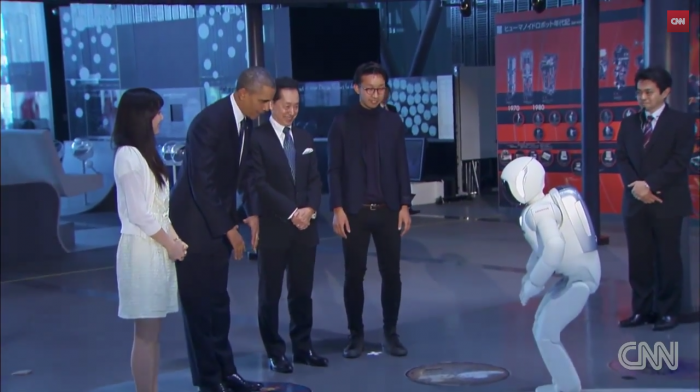 Remember this image, for it is the moment Obama doomed us all to a robot apocalypse.

I can just see it now: Bill O’Reilly comes screaming onto the television tonight in a blinding red haze of anger. He’s yelling frantically about how our president has just damned us all to a dim and dreadful future where robot overlords harvest the very lifeforce from our frail and withering husks in order to power their massive robot-manufacturing facilities. If he has any guests on the program, he will talk over them even more than he already does as he prattles on in a panicked voice about how Obama has done us a raw deal and sold out the human race in a shocking display of avarice and betrayal. He will end his segment by ripping open his shirt and baring his chest to those robot overthrowers who may be watching the broadcast, daring them to “take your best shot, you godless androids” before the camera cuts to black and an almost bewildered Megyn Kelly takes over.

He will, of course, be talking about Barack Obama’s tour of the Miraikan National Museum of Emerging Science and Innovation on Thursday, which resulted in the president bowing to Honda’s ASIMO, playing soccer with him, and watching him dance awkwardly.

The new version of ASIMO, Honda’s humanoid robot, helped introduce the 2015 Honda Fit and the all-new HR-V at the New York International Auto Show (NYIAS) last week and ended up stealing the show in the process. Honda’s Advanced Step in Innovative MObility has been around for more than 13 years, but years of advancements have made ASIMO more impressive than ever. It might also explain why ASIMO in many ways seem to have the disposition of a child. I think we can all agree that 13 is a rough year, whether it’s new feelings or hair in strange places or becoming aware that you are synthetic being created by a cruel race who just wants to see you dance.

President Obama took a moment during his visit to the Tokyo Miraikan Science Expo to accept ASIMO’s greetings and salutations in its not-at-all-creepy voice. ASIMO, upon meeting the leader of the free world, immediately said that it “can run really fast” and then proceeded to…well…run really fast. 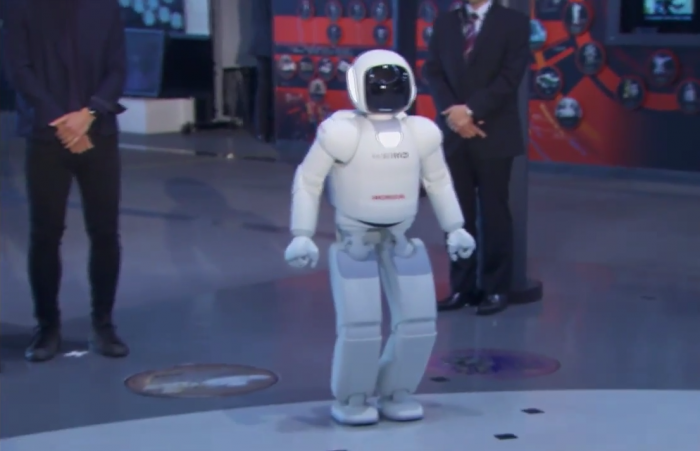 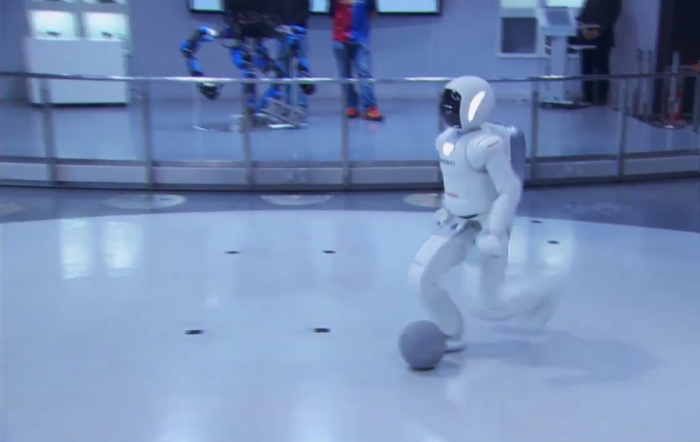 Conspiracy Guy: “THERE’S A FREEMASON SYMBOL IN THERE SOMEWHERE, I KNOW IT!”

So basically, even in meeting someone as influential and well-recognized as the POTUS, ASIMO carries itself no differently from the way your three-year-old acts when you have company over for dinner. Some advanced life form, huh? 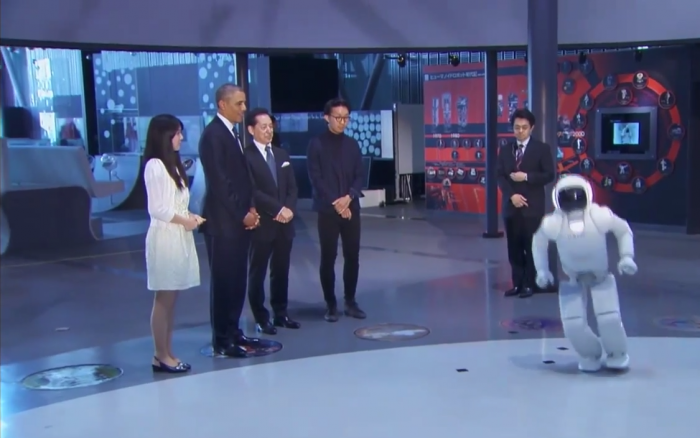 ASIMO is like Stuart from Mad TV. Yeah, I made a Mad TV reference. So what.

In any case, ASIMO is pretty incredible and could very well represent the future of humanoid robotics and our inevitable destruction at their cold, steel hands. In any case, I imagine it won’t take long for someone to call in to Rush Limbaugh’s show screaming about how THE PRESIDENT SHOULDN’T BE WASTING TIME PLAYING AROUND WITH THEM ROBOTS WHY DON’T YOU GET BACK TO WORK OH-BAM-UH. 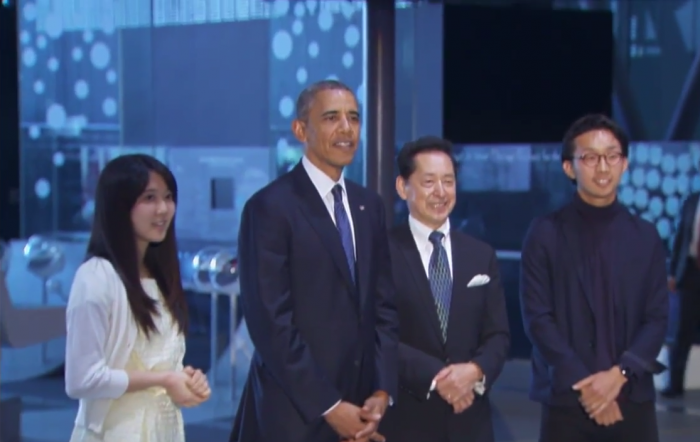 WHY AREN’T YOU FIXING ALL OF THE PROBLEMS, YOU JERK?

Or, who knows, maybe this whole thing will just blow over without the talking latex masks over at Fox News even noticing/trying to make a big deal out of nothing/giving Jon Stewart even more material. That means that they can go back to propping up a tax evader who threatens people with violence and is an abhorrent racist as some kind of latter-day George Washington-esque folk hero.