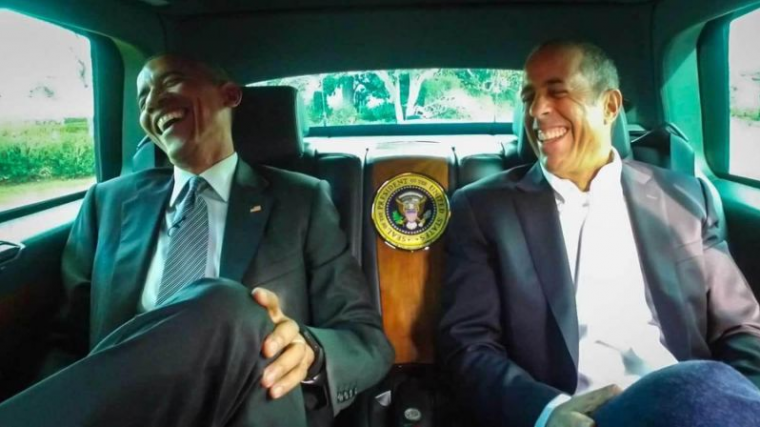 What did Seinfeld say to the President that was so funny?
Photo: © Crackle

Earlier this year, President Obama made a surprise appearance on Zach Galifianakis’ comedy show Between Two Ferns. Then after that Mr. Obama went exploring the Alaskan wilderness on the NBC show Running Wild with Bear Grylls, and now the President has his sights set on Jerry Seinfeld’s web series Comedians in Cars Getting Coffee.

Is It A Better Deal To Lease Or Buy A New Corvette? Answering these questions will help you decide

Sony’s streaming network Crackle, along with the White House, released a video promoting the President’s appearance on the web show, as well as a photo of Seinfeld and Mr. Obama sharing a laugh inside what’s presumably a bullet-proof and bomb-proof presidential limousine.

In the promo video, Seinfeld can be seen chatting with fellow comedians Will Ferrell and Steve Martin, before he rolls up in front of the White House in a 1963 Corvette Stingray Split Window. Seinfeld can be heard placing a call to Mr. Obama; then when the President answers, Seinfeld lets loose with an excited laugh. Unfortunately, that’s as much of a preview as we get because that’s when the video reaches its conclusion.

The full episode will air on Crackle on December 30th, in which the two gentlemen are expected to drive in circles around the White House driveway, take a tour of the building, then sit down for a cup of coffee, and discuss what’s on their minds.

“Growing up in the ’60s my kid dream was always to be an astronaut,” said Seinfeld, “doing a comedy show with President Obama in and around the White House felt like going into space.”

Video: Check out the entire promo