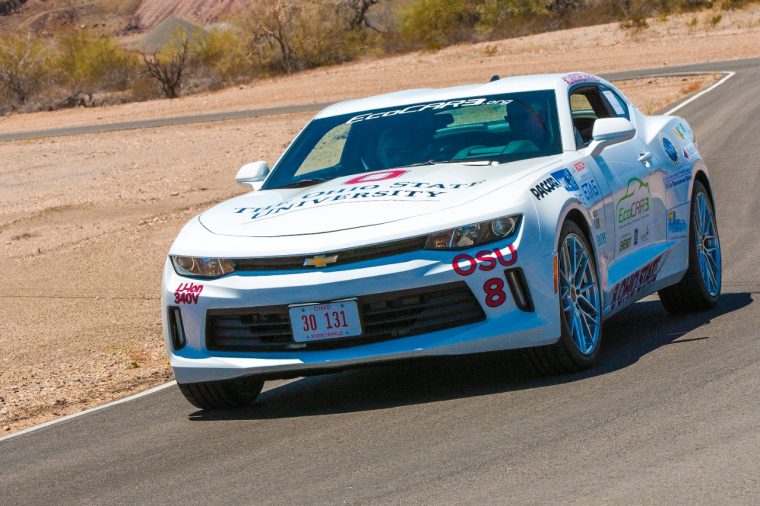 Today General Motors announced that Ohio State University had won this year’s EcoCar 3 – Advanced Vehicle Technology Competition. GM and the US Department of Energy (DOE) recognized OSU during an awards ceremony at the Hotel del Coronado in San Diego.

EcoCar 3 is the second stage of an ongoing 4-year competition that will conclude in 2018. OSU won first place last year, as well as in the final year of EcoCAR 2, meaning this marks the team’s third consecutive win.

“EcoCar 3 supports the Energy Department’s mission to accelerate the development of advanced technologies to reduce vehicle emissions and to increase efficiency so Americans use less petroleum,” said David Friedman, the Department’s Principal Deputy Assistant Secretary of Energy Efficiency and Renewable Energy. “American energy holds the promise for job creation and a growing economy, and nothing could be more evident than the efforts made by these creative and talented students in the EcoCar program.  These brilliant minds are the pathway of the nation’s automotive industry, and their dedication and results are an indication of the bright future ahead of us.”

OSU’s team has been rewarded with an extra $10,000 and the coveted Year Two trophy, having earned 880 out of 1,000 overall points and nabbing first place in 11 different categories. The Buckeyes were also first to drive their vehicle at Competition.

“The second year of the four-year competition added a level of complexity that definitely tested each of the 16 EcoCAR 3 teams in reworking the propulsion system of the 2016 Camaro,” said Chevy Camaro Vehicle Chief Engineer Al Oppenhesier. “Even with these new challenges, the students from Ohio State displayed an exceptional ability to integrate their Series Parallel Plug-in Hybrid Electric Vehicle (PHEV) system, transforming this high-performance vehicle into a uniquely eco-friendly alternative. Achieving such results is an impressive feat given the short time that they had with the vehicle.”

In the second year, the Buckeyes and other teams worked with EcoCar 3 organizers to secure the materials and industry mentors they needed to integrate their hybrid-electric designs into the Camaro.

“This year’s overall winner, Ohio State, demonstrated all-around excellence by using the research and data gathered in the previous year and successfully applying it during Year Two of the vehicle development process for their Series Parallel PHEV 2016 Chevrolet Camaro,” said Argonne National Laboratory director Kristen Wahl. “Most impressively, the OSU team’s Camaro was the first to meet all safety protocols even though they only took possession of the vehicle a few months ago.”