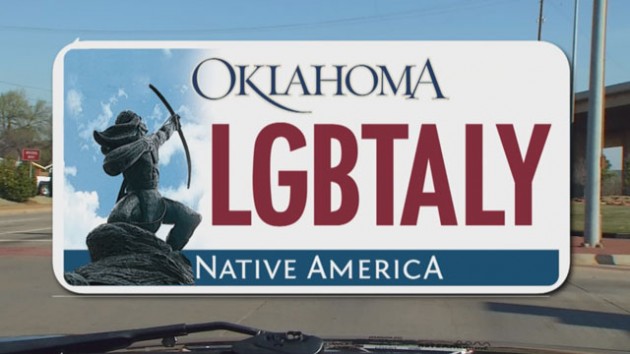 Yesterday, I wrote a bit on the Supreme Court hearing arguments in the case of Walker vs. Sons of Confederate Veterans. The issue at question (again, not whether or not the Confederate Flag is a symbol of racism and slavery that people appropriate under the false pretense that it’s more to do with Southern pride—because it is): whether specialty license plates qualify as a forum for private speech, and whether the state of Texas violated the SoCV’s First Amendment rights in denying them their plates

In a coincidentally-timed story, John Keefe of Oklahoma filed a request with the state’s Tax Commission for a vanity plate reading LGBTALY, or “LGBT Ally.” Keefe chose this because he supports the rights of the lesbian, gay, transgender, and bi-sexual community, which seems to be a noble enough cause.

The Oklahoma Tax commission denied his request because “it was sexual in nature.”

Charles Broadway, the attorney representing Keefe in his appeal, believes that the state simply misunderstood the meaning of the term LGBT. A spokesperson with the Oklahoma Tax commission told News9 that they would not discuss specifics of the case.

In all likelihood, if this was a simple matter of misunderstanding, the case will be overturned and Keefe will be permitted to use his plate as a forum to proclaim himself as an ally of the LGBT community.  If this was something more discriminatory—as appeared to be the case when a New Jersey woman was denied her request for an “8THIEST” vanity plate but had a subsequent application for a “BAPTIST” plate accepted—then things could get interesting.

Whether it has any bearing on the Supreme Court case, or vice versa, remains to be seen. Stay tuned.