It’s been more than 60 years since the first-generation Corvette rolled off the assembly lines and ever since then, the famous Chevy sports car has featured rear-wheel drive, two doors, and an upfront engine position. However, all of that appears to be changing come 2018.

After years of rumors that the Corvette would eventually be produced in mid-engine format, new spy photos have been published that give us the clearest look yet at Chevrolet’s future supercar. While many auto publications have paid for the right to publish these photos, Jalopnik interestingly passed on the opportunity saying the car looked too similar to a Lamborghini Gallardo. 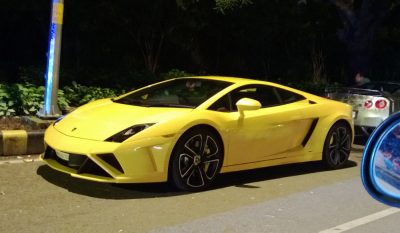 Why would Chevy put camouflage on an old Lamborghini Gallardo?
Photo: © Suneet Panesar

It could be argued the front end of the car captured in those spy shots does look similar to the Gallardo, but the rear of the vehicle still features the famous quad taillights of the Corvette.

According to a recent article published by Automotive News (subscription required), the reason General Motors is developing a mid-engine Corvette in the first place is because the rear-wheel drive and front engine format has simply been pushed as far as it can go. The new mid-engine format would allow the Corvette to compete with the likes of the Ford GT and Acura NSX. In addition, with the mid-engine design, it would also be easier to create plug-in hybrid and all-wheel drive versions of the new ‘Vette.

As for the powertrain, Car and Driver reported that a new seven-speed dual-clutch automatic gearbox will do the shifting job, but GM Authority has speculated that GM’s new 10-speed automatic transmission could find its way inside the eighth-generation Corvette. There have also been multiple rumors regarding possible engines, including the chance of a small-block V8 or twin-turbo V6.

We might not know the exact engine and transmission combination that will be used in the new Corvette until the 2018 Detroit Auto Show, which is the date that Car and Driver reports the mid-engine Corvette will be officially presented to the general public.