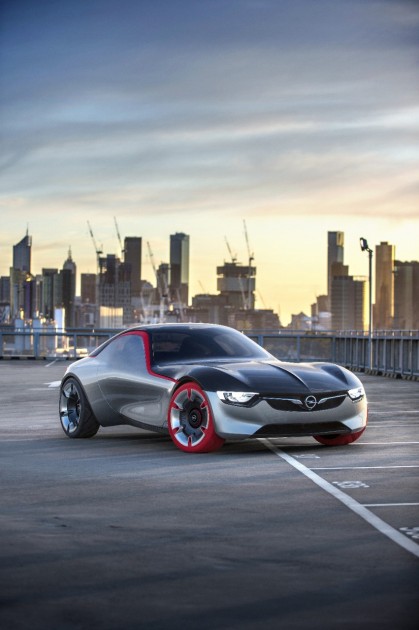 It’s pretty well understood that whenever an automaker shows off an extremely stylized concept vehicle and suggests that it will enter into production, the finished product is going to be considerably toned down from the inspiration. If, say, Buick decided it was going to go with a two- or four-door version of the Avista Concept (and it definitely should do something along those lines), it is pretty likely that something is going to get lost in the translation even if it winds up being an incredibly awesome thing (which it almost definitely would).

So, naturally, one has to be skeptical when it is reported that Vauxhall/Opel is considering taking the all-wheel-drive platform underpinning the Mokka X crossover and using for a production version of the Opel GT coupe. In case you are not familiar with the Opel GT: it’s the completely alien coupe you see at the top of the page. Yeah, you know, the one with seamless and semi-transparent windows, two different color tires, no side-view mirrors, and looks very much like it was sketched out by an overly-energetic 16-year-old who was just asked to draw what they want their first car to look like.

According to AutoCar, the rear differential and suspension for the Mokka X are being considered for a production version of the GT. The clearest indication that this may be a thing is Opel CEO, Dr. Karl-Thomas Neumann saying that “engineering is looking at a solution” for the lack of a rear-drive platform for a coupe and that “there are possibilities.” Which is not the most solid evidence in the world, but hey, speculation is fun.

It is noted, however, that while work on GT is being undertaken even as we speak, “the business case for the investment in a compact coupe has yet to be clearly established.” Good luck with that! You’re probably gonna need it.