Opel this morning revealed the all-new Opel Crossland X, its recently announced B-segment crossover that is part of the brand’s “7 in 17” product offensive. Opel was super, duper excited to announce the Crossland X, it’s fair to say. How can you tell? Just look at all these “X” puns it worked up for the press release:

Though, it’s fair to question why the PR person who worked this thing up (presumably Grumpy Cat) could not be bothered to work up a pun for the X family. Why not “X-ponentially growing family” or “X-ceptional addition to X family” or “X-erting the energy necessary to bring you more”? Surely, one of those would have fit the bill just fine.

Vauxhall, on the other hand, strayed from puns altogether in their announcement:

That’s what you call a “just the Fa-X, ma’am” style of approach. Yeah, I think that tracks, right?

In any case, the Crossland X will make its world debut proper in Berlin on February 1st ­at the same vernissage where Opel is likely to unleash its…ugh…Grumpy Cat calendar. Opel says that it is built specifically for urban driving, highlighting its parking-friendly dimensions—at 4.21 meters in length, it’s 16 centimeters shorter than the Astra. But with a 1.59-meter height making for plenty of headroom, 1.77-meter width making for plenty of shoulder and hip room, 60/40-split fold sliding rear seats, AGR-certified ergonomic seats, and amenities up to and including Opel OnStar and IntelliLink infotainment technology, there is no shortage of comfort and convenience on the inside. How X-citing!

“Demand for small SUV and crossover models tailored for urban traffic is increasing significantly. The Crossland X with its combination of cool, SUV-inspired design, outstanding connectivity and high practicality represents a second strong competitor in this vehicle class next to our sporty Mokka X,” said Opel CEO Dr. Karl-Thomas Neumann. “Our agile Crossland X delivers on driving pleasure while oozing urban lifestyle, making it perfect for the city and escapes to the countryside.”

Opel did not provide technical specs for the Crossland X—that’s likely being saved for Berlin—but it was revealed that the new crossover will be offered with Adaptive Forward Lighting LED headlamps, head up display, Active Park Assist, Panoramic Rear View Camera, Forward Collision Alert with pedestrian detection and Automatic Emergency Braking, and numerous other active safety features. You could say that it is an x-emplary vehicle for those who value safety. Well, you could, anyway.

The Crossland X will be joined later this year by its C-segment cousin, the Grandland X. Other new additions to Opel’s 2017-18 lineup include the Ampera-e, Insignia, Insignia Grand Sport, Insignia Sports Tourer, and Vivaro. 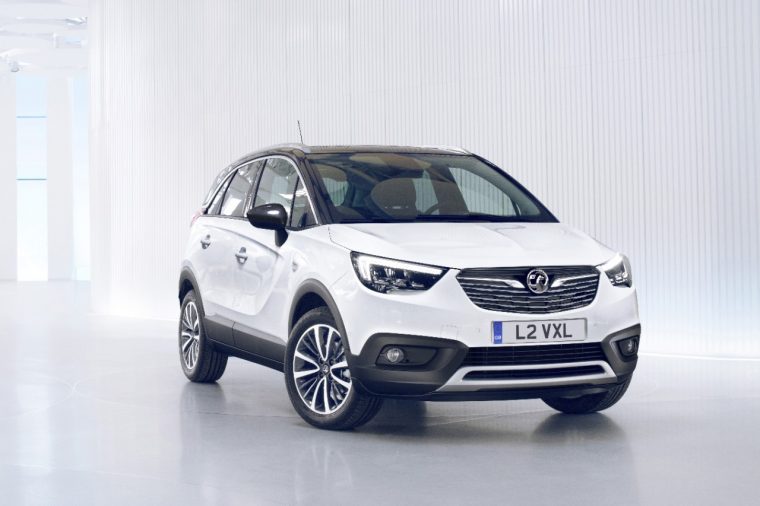