Park Your Camry in the Cubs Camry Lot This Baseball Season 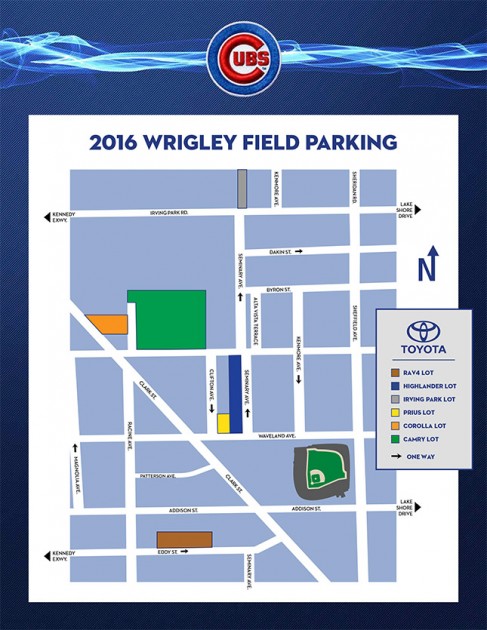 In case you didn’t know, Toyota has signed a multi-year sponsorship of the Chicago Cubs, effective since 2010. And, as part of that sponsorship, things have been changing as of late down at Wrigley Field. First, there was the 360-square-foot Toyota logo hanging out above the left-field bleachers. That logo was replaced in the 2014 season by a huge video board sitting above the field’s new bleachers. Now, for the 2016 season, Toyota is going with what it knows best: cars (or, more specifically, the places where people park them).

Don’t Own a Camry? Better get on that…

That’s right—if you’re heading to a Cubs game this year, chances are you’ll be parking in a lot named after one of Toyota’s best-selling models. But don’t worry; you’re allowed to park in these lots even if you don’t own a Toyota (though think of how meta it will be if you do). In total, there are five lots named after Toyota vehicles—RAV4, Highlander, Camry, Corolla, and Prius. (There’s also the Irving Park lot, but I don’t think Toyota sells one of those. Maybe Chevy?)

In addition to renaming the parking lots after Toyota cars, Wrigley Field will be adding multiple new food items, including the Chicago Dog Bloody Mary, which is like a regular Bloody Mary but with a skewer containing a mini Vienna beef Chicago dog and various accoutrements, served in a souvenir mason jar. There hasn’t been any explanation as to why the Cubs decided to offer a beverage in a glass jar when they don’t allow glass of any kind inside the ballpark in case of angry debris-throwing. Unfortunately, none of the new refreshments are modeled on Toyota vehicles, though it’s possible the Cubs will introduce a Camry-shaped burger for the 2017 season.