At the beginning of the 2014 International Consumer Electronics Show (CES) in Las Vegas, Chevrolet announced that it will be releasing a first-ever Performance Data Recorder for the 2015 Corvette Stingray.  Chevrolet’s new system will allow drivers to record HD video (accompanied by telemetry overlays) so that they can show off their on- and off-track driving skills.

The Performance Data Recorder for the 2015 Corvette Stingray was developed alongside British motorsports engineers Cosworth, who also supplies Corvette Racing with data acquisition and telemetry systems. The PDR was announced as being available at the start of production on the 2015 Stingray, which is slated for Q3 2014; no price point has been determined.

“The Performance Data Recorder combines the ability to record and share drive videos with the power of a professional-level motorsports telemetry system,” said Tadge Juechter, Corvette chief engineer, in Chevrolet’s announcement. “Drivers can easily record and share their experiences driving down the Tail of the Dragon or lapping Road Atlanta. In addition, with the included telemetry software, users can analyze their laps in incredible detail and find opportunities to improve their driving and lap times.” 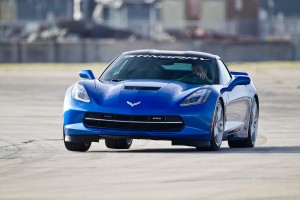 The three primary components of the PDR include a 720p HD camera mounted in the windshield header trim, self-contained telemetry recorder, and dedicated SD card slot in the glove box for data transfer. The Performance Data Recorder for the 2015 Corvette Stingray can record video with four different overlay options:

“The ability to review laps between track sessions can identify immediate adjustments for quicker laps in the next session,” said Juechter. “It’s like having a 32-GB crew chief trackside providing you with real-time feedback to improve your driving skills.”

Brought to you by Levis Chevrolet Cadillac in Slidell, Louisiana.