One lucky man has won Chrysler’s 2014 National Sweepstakes, which allows him to put $45,000 toward the purchase of a new Chrysler, Jeep, Dodge, Ram, Fiat, or Alfa Romeo vehicle here in the United States. That man is Michael Christman of Pottstown, Pennsylvania, just outside of Philadelphia. Christman was chosen at random out of 1,007,277 entrants from last year and has selected a 2015 Ram 2500 Laramie Cummins Turbo Diesel for his prize. 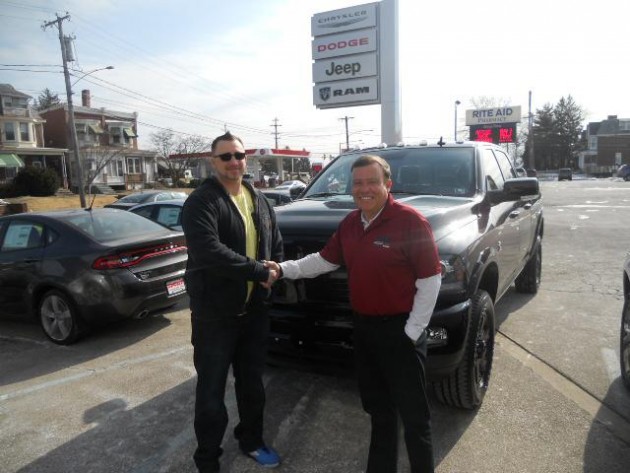 Participants entered at a number of events between January 1st and December 31st of last year, as well as online. These included the Camp Jeep, Chrysler, and Ram Truck test tracks that the automaker took to auto shows last year, as well as “The Chrysler 200 Experience” test drive tour, Chrysler’s “Drive to 200 Challenge,” Dodge Booster Club and Chrysler Drive for the Kids Fundraisers, and more. Christman himself entered at a Ram Truck display at the Great American Outdoor Show in Harrisburg, Pennsylvania.

“This has been such a humbling experience, and I still don’t believe it!” said Christman. “I am self-employed and at the time that I entered the giveaway, I purchased a Ram 1500 HEMI® to better accommodate the needs of my business, but I really needed the power of the Ram 2500. After being contacted by FCA US, I had the privilege to select my dream truck, the 2015 Ram 2500 Laramie Cummins®. With this truck I will be able to transport my heavy tools and supplies, as well as employees to job sites more efficiently thanks to the diesel engine. I have dreamed of this day and feel very fortunate to have won.”

Bummed you missed out on your chance last year? Lucky for you, Fiat Chrysler Automobiles isn’t fixing what ain’t broken. The contest has been established again for 2015, meaning you’ve got ample opportunities to win $45,000 toward the purchase of a new vehicle—just read up on the official rules first.